Harvesting renewable ‘blue energy’ from salt concentration gradients, such as those that occur at river mouths where fresh water mixes with salty sea water, just got a boost. An osmotic nanogenerator made from atom thick molybdenum disulfide (MoS2) has been created that can turn much more of this chemical energy into electricity than ever before.1 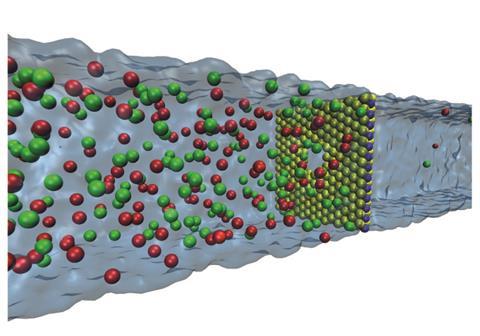 With the potential to be a considerable source of energy, osmotic power has gained ground in recent years with several pilot power plants around the world. It’s estimated that a total of around two terawatts of clean energy – the equivalent of around 2000 nuclear reactors – could be harvested worldwide from locations where salt concentration gradients occur.

Two main membrane technologies exist to harness osmotic power from solutions with differing salt concentrations. One is pressure retarded osmosis (PRO) which uses membranes to exploit pressure differences and drive a turbine, while the other is called reverse electrodialysis (RED) which involves ion exchange across a charged membrane. However, both methods have been limited by the efficiency and power density of materials that have only been able to generate a few watts per square metre of membrane. However, the world’s first prototype PRO osmotic power plant, which was opened by Statkraft in Norway in 2009, was deemed uneconomical and shelved in 2013.

Better materials have been developed though, including boron nitride nanotubes which French researchers showed could produce 1000 watts per square meter in 2013, leading to a patent and a spin-off. Now, Swiss and US researchers have discovered something even better – a MoS2 membrane punctured with pores that has an estimated power generation two to three orders of magnitude greater than boron nitride nanotubes, and could be as much as a million times greater than traditional RED osmotic power membranes.

‘This is the thinnest membrane for this purpose,’ explains Jiandong Feng who led the work at the Swiss Federal Institute of Technology at Lausanne (EPFL). ’As transport through a membrane scales inversely with membrane thickness, our single layer MoS2 nanopore, produced substantial power density.’ 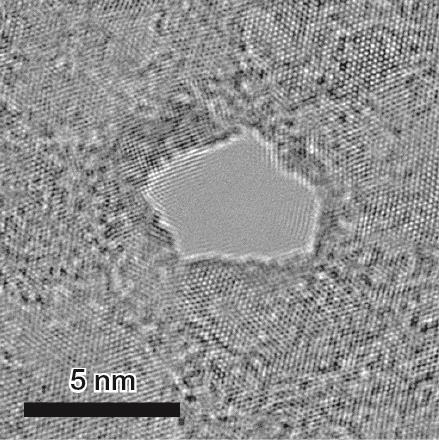 The new RED-based osmotic nanogenerator has a 0.65nm thick MoS2 membrane with a single nanopore that separates two reservoirs containing potassium chloride solutions of different concentrations. A chemical potential gradient forms at the pore where the two solutions can mix and this drives potassium and chloride ions over the pore. Since the pore’s surface is negatively charged, it acts as a screen to usher through many more positive than negative ions which produces a current. The team showed off the nanogenerator’s capabilities by connecting two sheets together to power a MoS2 transistor.  Although the team only demonstrated this small scale application, Feng says the nanogenerators have potential for scaling up for sea water power generation.

’This shows that new materials, with a diverted use from nanoelectronics towards fluid transport,
can make a breakthrough in this field,’ comments Lydéric Bocquet at France’s National Center for Scientific Research in Paris who was behind the boron nitride nanotube research.2 However, he suggests that making metre square MoS2 membranes, which to his knowledge has never been achieved, could limit large-scale power production. But he adds it is still worth a try.

Even if it’s possible to make large MoS2 sheets, this natural power source may still be out of reach, suggests Ngai Yin Yip who studies membrane technologies at Columbia University in New York, US. ‘There are other practical and technical obstacles in accessing the energy of natural salinity gradients on a large scale, such as the presence of naturally-occurring foulants in river water and seawater clogging up nanopores,’ he explains.

However, both Bocquet and Yip think the nanogenerators could find use in low energy, small-scale niche applications. ‘If the system can be further developed to draw from two separate reservoirs of different salinity with minimal energy consumption using innovative techniques, the nanogenarator system can be perpetually self-powered,’ says Yip. ‘These nanogenerators could be deployed in remote locations without having to be recharged or have batteries replaced, to power devices such as nanosensors.’