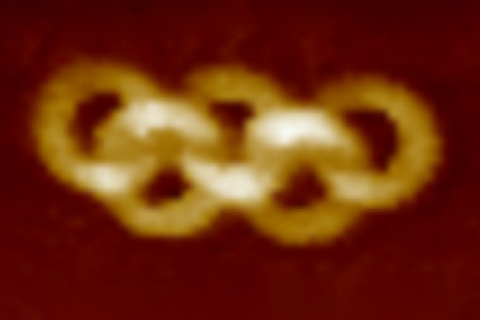 The nanolympiadane structure created by the self-assembly of interlocking rings

‘Nanolympiadane’ – a nanoscale assembly composed of five interlocked toroids resembling the Olympic logo – is one of the latest supramolecular polycatenanes assembled using only weak noncovalent interactions.1 Through a clever solvent-mixing strategy, researchers have been able to prepare self-assembled structures containing up to 22 rings using simple building blocks. The new catenanes are large enough to be observed using atomic force microscopy and could find applications in materials science.

Polycatenanes are structures containing several mechanically interlocked rings to form a chain. Creating such architectures is challenging, especially if the annular constituents are composed of a large ensemble of molecules. In this case, a molecular assembly system that can consistently generate large rings with a uniform diameter is necessary. Scientists working with Shiki Yagai and Sougata Datta of Chiba University, Japan, have used a special kind of supramolecular polymer to achieve this.2 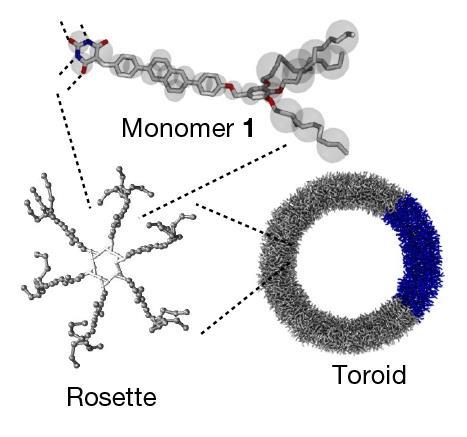 Models of one monomer

The materials are made of monomers that can connect through hydrogen bonds to form six-membered rings – called ‘rosettes’ – which are then linked by π-stacking interactions to build polymeric structures with different topologies including toroidal rings. ‘Each fundamental ring in our nano-polycatenanes is composed of 600 small molecules held together by weak noncovalent interactions,’ explains Datta. ‘This is completely different from previously reported polycatenanes, where each constituent ring is made of strong covalent bonds.’

Yagai adds that while earlier methods to produce polycatenanes have relied on metal-templated synthesis, the new approach exploits the tendency of molecules to assemble on the surface of existing toroids. ‘Spectroscopic investigations and multiscale molecular simulations revealed that if we add monomers to a solution containing pre-assembled rings, they tend to assemble on the surface of those rings due to solvophobic and van der Waals interactions. Therefore, the monomers are more likely to form rings that are interlocked with pre-formed structures rather than in other empty spaces,’ he says. ‘This phenomenon is called “secondary nucleation” and is the key to the polycatenation mechanism.’ 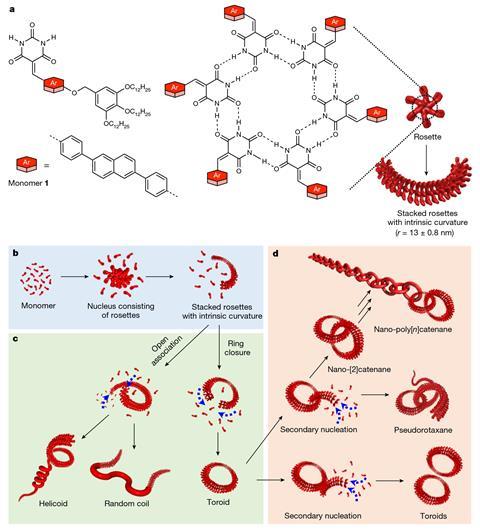 Once one ring is finished the monomers tend to start a new one on a complete ring, leading to the formation of polycatenanes

The team found that they could influence the ring closure by varying the solvent and the cooling rate. To create the new materials, they injected a concentrated solution of molecules pre-dissolved in a polar solvent into a nonpolar solvent. ‘In general, it is difficult to predict and control the topology of the formed supramolecular assemblies, but if you get the conditions right and it works, it cannot get much simpler than this,’ says Michal Juríček who studies functional organic molecules at the University of Zurich in Switzerland.

Yagai and colleagues were able to prepare catenanes containing varying numbers of toroids. They called the five-ringed structure ‘nanolympiadane’ in homage to ‘olympiadane’, a [5]catenane system reported in 1994.3 David Amabilino of the University of Nottingham in the UK, who was involved in the synthesis of olympiadane, points out that nanolympiadane is a new type of noncovalent catenane whose rings are much larger than those in the molecular system. ‘In the research by Yagai’s team, the rings are about 25nm in diameter, making the five-ring system about 90nm long, whereas olympiadane is about 4nm long,’ he says. Amabilino believes that being able to prepare catenanes in this way opens up a whole new field of research. ‘These materials are unprecedented. Up to now, this kind of assembly hasn’t even been considered broadly, because of the potential difficulty in making the systems in a controlled way. Yagai’s group have opened the doorway to that.’

Guillaume De Bo from the University of Manchester in the UK agrees. ‘This is a beautiful procedure that provides a rapid access to rather large polycatenanes. It shows how self-assembly can be used to build complex supramolecular architectures,’ he notes. ‘It would be interesting to see how the composition and size of the rings could be tuned using different building blocks, and how the dynamic and mechanical properties of these self-assembled polycatenanes compare with their covalent counterparts.’