Researchers in the US and Germany have found that the speed of synthetic ’nanomotors’ responds to nearby concentrations of silver. The discovery suggests that nanomotors could be used to detect trace levels of silver and other toxic substances in water supplies - a practice that has previously required bulky instrumentation.

Nanomotors are nano-sized machines that can convert energy into motion. For a long time the only known nanomotors were biological and made from natural proteins, but in the last decade scientists have been able to create synthetic nanomotors with similar activity.

Catalytic nanowires are one of the most studied varieties of synthetic nanomotor, constructed with ends made from different metals, such as gold and platinum. In a fuel of hydrogen peroxide, the platinum end oxidises the peroxide while the gold end reduces it to water, with the combined reaction propelling the nanowire forward.

Joseph Wang of the University of California in San Diego and colleagues first discovered that silver can affect this propulsion mechanism when investigating gold-platinum nanowires in an electrolysis cell. Nanowires seemed to accelerate near the cell’s electrode, where silver ions were being produced. Intrigued, the researchers monitored the position of the nanowires via optical microscopy in the presence of 11 different metal ions. Ten reduced the speed of the nanowires, while only silver ions increased the speed - from about 10

m/s. Moreover, the speed increase was proportional to silver-ion concentration. 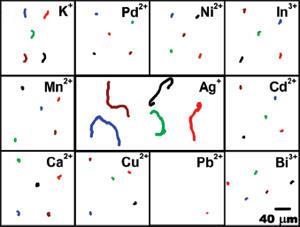 Wang’s group believes the most likely explanation is that the hydrogen peroxide helps to reduce the silver ions, thereby depositing silver onto the nanowires and boosting their catalytic ability.

Alex Zettl, a nanomotor researcher at the University of California at Berkeley, thinks the work is exciting because it shows that local chemical reactions can change the visible motion of an object. ’Overall, this is beautiful work and it will very likely lead to more exciting discoveries in ion chemistry and nanoparticle propulsion,’ he said.

Silver ions are toxic and have to be monitored in water supplies and certain industrial processes, particularly with the growing use of silver nanoparticles as antibacterials. Techniques such as atomic spectroscopy can detect trace levels, but these tend to be too cumbersome to be used in the field. A nanomotor system could make an attractive alternative.

Ayusman Sen, a chemist at Penn State University who studies synthetic nanomotors, agrees. ’The specificity for silver is high and it provides a "visual" readout,’ he said. ’The field of catalytic nanomotors is a new one and I am confident that we will see many more interesting applications such as self-assembly of superstructures, active drug delivery, and active sensing.’