Study shows even 'safe' nanoparticles can have physiological consequences, say US researchers

Nanoparticles used in food and pharmaceuticals could have unintended physiological effects. This is the suggestion of US researchers who have showed that polystyrene nanoparticles can affect the uptake of iron - an essential nutrient - in a model intestine.

Manmade fine particles, including nanoparticles, are now regularly used in food and pharmaceuticals - so regularly that a person in a developed country consumes as much as 100 trillion of them every day; mostly titanium dioxide, silicates and aluminosilicates found in food additives. As a result, scientists have been eager to investigate possible adverse health effects. A high reactivity thanks to their huge surface area, and an ability to pass through cell membranes, are just two areas of concern.

Yet most studies so far have concentrated only on direct health effects, says lead author Gretchen Mahler of Binghamton University in New York. ’The question we were thinking about was not if exposure to [nanoparticles] would kill a person or severely damage their organs, but if a person was ... taking a nanoparticle-formulated drug to treat a condition, for example, would there be unintended physiological consequences,’ she says. 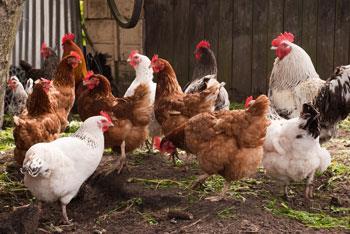 Mahler, together with Michael Shuler of Cornell University in New York and colleagues, used a model of human intestinal-lining cells cultured in the laboratory and a live chicken intestinal model to investigate the uptake of iron after oral exposure to 50nm carboxylated polystyrene nanoparticles. Such nanoparticles are not used in the food or pharmaceutical industry, but they have properties - such as fluorescence- that makes them easier to track in experiments, Mahler says.

The researchers found that different levels of nanoparticle exposure produced different effects. For brief, acute exposure, they found that the rate of iron absorption in chicken decreased by up to 50% between a few minutes and a few hours after consumption. However, for chronic exposure - a daily dose of 2mg/kg for live chickens or human intestinal cells - iron absorption increased by up to 200%. This, they believe, was because the villi - the small projections on the surface of the intestine - increased in size. ’What this showed is that there is a physiological response to oral nanoparticle exposure,’ Mahler says.

Lang Tran, an expert in nanoparticle toxicology at the Institute of Occupational Medicine in Edinburgh, UK, thinks the results are interesting. However, he says the study would have been better done using standard rodent models. ’One must be cautious about this type of study,’ he adds. ’Are the doses too high? Is the exposure level relevant? In short there are considerable uncertainties and one must be careful to draw conclusions.’

Mahler defends her group’s use of chickens, saying they have similar data for iron absorption to humans and that the type of intestinal surgery involved would have been difficult on smaller animals. She says her group now plans to examine the effects of different nanoparticles on nutrient absorption. ’The most important particles to study next will be those that are already used in food and pharmaceutical applications,’ she adds.