Nanoribbons put electrons in a spin

Calculations predict that some graphene nanoribbons behave as half-metals, making them a useful material for spin-based electronics (spintronics).

A small ribbon made of the carbon honeycomb pattern found in graphite and nanotubes could display intriguing electronic properties and serve as a material for spin-based electronics (spintronics), researchers have predicted.

While conventional electronics uses the charge of the electron and ignores its spin, spintronics is all about manipulating the spin of the electron (Chemistry World January 2004, p18). One kind of spintronics, based on metals and the phenomenon known as giant magnetoresistance, is already being used in computer hard drives. Other possibilities, involving semiconductors or quantum dots are still being explored.

A class of   materials known as half-metals offers additional potential for spintronics. In such materials, all electrons of one spin will flow freely as though they were in a metal, while those of the opposite spin will stay put as they would in an insulating material. This intriguing property, which could be described as spin-based semiconductivity, has been found in some exotic inorganic materials, but so far not in any carbon-based materials.

Steven Louie’s group at the University of California at Berkeley, US, has now used ab initio calculations to show that certain carbon nanoribbons will display half-metallicity. The researchers calculated the electronic properties of graphene sheets (the single layers of hexagonally arranged carbon atoms found in graphite). Specifically, they looked at ribbons between 1.5 and 6.7 nm wide,  with a zigzag border at each side (see image below). 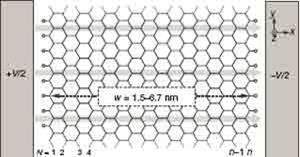 The researchers found that such ribbons, if subjected to an electric field perpendicular to the ribbon length, should display half-metallic properties. They even predict that these properties should be robust against imperfections of the border structure.

As for the step from theory to practice, Louie is optimistic. ’Our clever experimental colleagues have now successfully fabricated, patterned, and measured micron-size graphene structures on surfaces,’ he told Chemistry World. ’Measurement of the electronic properties of graphene nanoribbons should be possible in the near future.’ However, practical applications may be a bit further away, Louie said.

Spinning into a new era of computing

Flipping a spin is easier and faster than moving around electrons. So are we going to switch to spintronics? Michael Gross investigates.