Teams from the US and Germany have developed a spray drying technique to fabricate drug formulations smaller than 100nm for pharmaceutical trials, improving the drugs’ solubility, or bioavailability.

Over the last decade, the molecular complexity of drugs has increased significantly, leading to poor solubility, which means that the compounds can’t be used in the human body. To determine if new formulations have potential as successful drugs, solubility tests are run at an early stage of development. However, the amount of drug available for these tests is usually very small.

One way to get around this problem is by decreasing the compounds’ particle size. David Weitz from Harvard University, Cambridge, US, and colleagues, have done just that by developing a microfluidic device made from poly(dimethylsiloxane), incorporating two flow-focusing streams  and a third for compressed air to form a spray, that can generate particle sizes below 100nm.

’We were searching for convenient ways of creating drug nanoparticles to increase the bioavailability. Rapid precipitation from solution through addition of a poor solvent is a simple means of making small particles, but they tend to coarsen and become larger than the desired nanometre size,’ explains Weitz. ’To prevent this, we wanted to remove them from the solvent as quickly as possible and we thought that drying the solvent would be a way to do so.’ 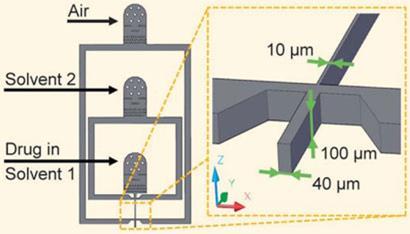 Two flow-focusing streams for drug formulations and a third for compressed air to form a spray generate particle sizes below 100nm, increasing the drugs’ solubility

The team tested the device using the drug danazol. They dissolved danazol in an organic solvent and injected it into the first stream and injected another solvent into the second stream. The two solvents met the compressed air at a cross-junction, forming a spray, which caused the solvents to evaporate and the compound to be produced as a fine powder on a collection area. Changing conditions such as the distance of the spray nozzle from the collection area and the air pressure allowed the team to control the size of the nanoparticles.

’The technique will have an impact on the development of new drugs that are only available in small quantities,’ says Jason Burdick from the  Polymeric Biomaterials Laboratory at the Universityof Pennsylvania, US. ’It’s a very interesting and relatively cheap process.’

As well as nanoparticles, the design also allows drug co-precipitates and nanosuspensions - which enhance solubility - to be made, by co-spraying two substances. Weitz says that work is being performed to explore the possibilities of scaling up the technology to produce larger drug quantities.