Coating nanotubes with fuel allows them to convert an exothermic reaction into electricity, thereby opening up new avenues in energy research 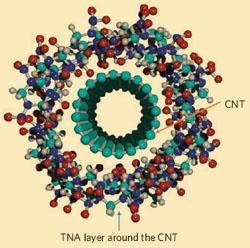 Carbon nanotubes are wrapped in TNA

A fundamentally new type of power generation may be on the horizon thanks to researchers in the US and Korea who have created a nanotube ’fuse’ that harnesses the energy from chemical reactions. The device converts chemical energy into electrical energy, yet is so small compared with traditional batteries that it opens the door to applications such as floating sensors or new fuel cells.

Carbon nanotubes are known to have unusually high thermal conductivity because of a streamlined way in which packets of heat energy, known as phonons, can travel through the structures. Recent theory shows that if the average distance between phonon collisions matches the physical size of an external exothermic reaction, the phonons should be able to create an accelerating ’reaction wave’ that quickly spreads down the nanotube.

Michael Strano and colleagues at the Massachusetts Institute of Technology, US, and Sungkyunkwan University, Korea, have now demonstrated such a reaction wave. What’s more, they have shown how it can create a parallel ’thermopower wave’ to convert an exothermic reaction’s heat into electricity. ’This creates a new area of energy research,’ says Strano.

To create their device, Strano’s group wraps a 7nm-thick layer of fuel known as cyclotrimethylene trinitramine (TNA) around a nanotube. After the TNA is ignited, the reaction wave begins to travel through the structure while coupling back to unspent TNA - like a ’fuse on steroids’, according to Strano. In turn, this feedback creates the thermopower wave, which generates a parallel electrical current.

Ignition at one end of a TNA-CNT results in an exothermic reaction and heat transfer along the length of the CNT, with feedback

There are already applications on the cards for such nanotube power generators. One advantage is that, once all their fuel is spent, they can be reloaded with more. This opens the door to a new type of fuel cell, in which a liquid fuel such as methanol is injected onto a nanotube array for thermopower generation, and then re-injected once it is used up. Although this sort of technology would require more research, it has the potential for much higher efficiency than traditional combustion engines, and would have no moving parts.

In addition, the feather-like weight of nanotubes means they could power all sorts of ultra-small devices. ’Imagine sensors that could float in the air like dust, but send out a cell phone signal when asked,’ suggests Strano.