Nanotubes: bend me, shape me, anyway you want me

Curved, twisted and overhanging microscopic structures have been made by US researchers from carbon nanotubes by exploiting capillary action. The technique can be used to make patterns of multiple different shapes at the same time and opens up new possibilities for tunable surfaces.

John Hart and his team from the University of Michigan in Ann Arbor, have used the forces generated by capillary action of a solvent as it condenses and evaporates between carbon nanotube fibres to pull, bend and twist forests of fibres into cones, domes, helices and other unique shapes. ’These sorts of shapes are difficult to make from any material, let alone in carbon nanotubes,’ says Hart, adding that with other microfabrication techniques it’s traditionally hard to make things that are curved, twisted or generally overhanging without making them one at a time. 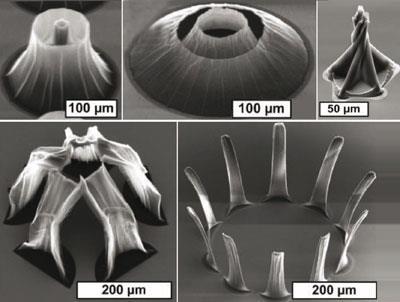 The process involves laying down an iron catalyst in a defined pattern on the growing surface, then using chemical vapour deposition to grow forests of vertically aligned nanotube fibres. These are quite normal techniques, but what Hart’s team then does is condense acetone into the forests and allow it to evaporate under controlled conditions. Capillary action of the solvent pulls the fibres together into a shape that is dictated by the shape of the original catalyst outline - ring shaped forests pull into volcano-like cones, whereas semicircles bend over into petal-like structures.

John Fourkas, an expert in micro- and nanofabrication from the University of Maryland, US, is impressed by the level of control Hart’s team has exerted over the structures. ’They’ve done a very careful job of figuring out the underlying mechanism,’ he says. Fourkas also notes that the scale of the process is a major advantage: ’this has a lot of promise for making reproducible structures over fairly large areas.’

Hart explains that one of the biggest differences between this new method and others is the ability to make a variety of different shapes on the same surface all at the same time. ’This lets us think about programming the properties of materials in a very local way,’ he adds, whether those properties relate to wettability by different liquids, promoting or discouraging cell growth or even how light interacts with the surface if they can get the structures small enough.