Nanoscale electronic probes that can enter cells without damaging them have been made by US scientists. The probes could replace invasive techniques for measuring electrical and chemical changes inside, outside and across cell membranes.

Measuring electrical or chemical activity such as opening or closing of ion channels in cell membranes has been done using the ’patch clamp’ technique since the 1970s. This involves trapping a section of membrane in the tip of a glass pipette with an electrode inside. ’It’s a very powerful technique,’ admits Harvard University’s Charles Lieber, ’but you can’t make the pipette opening much smaller than about 100nm.’ This means that making measurements physically damages the cells and limits their spatial resolution.

’I found it remarkable that the power of digital electronics hadn’t been used to build new tools for making biological electrical measurements,’ says Lieber, but he explains that this is mostly because electronic components are usually linear and confined to surfaces. ’So you have two big contacts on either end, and there’s no way you can shove that kind of linear device into a cell without destroying it.’ 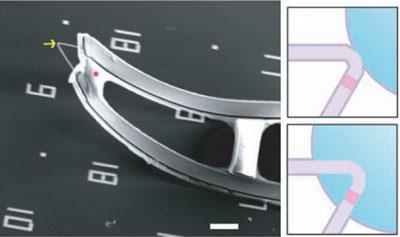 Lieber’s team has now used V-shaped silicon nanowires to make a probe that features a nanoscale field effect transistor (FET) at its tip. FETs change their electrical conductivity according to some outside stimulus - like an electrical field or chemical change - so can be used as sensors. The probes are mounted on flexible polymer supports, which curl upwards to stick out from the surface on which the devices are made, allowing them to approach cells. Coating the tip with a lipid bilayer allows it to slide effortlessly through cell membranes. 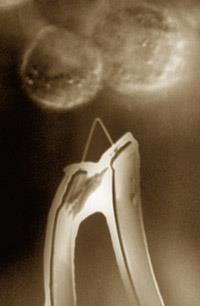 ’Being able to insert an electrode so that it’s an intimate and integral part of a cell opens a great deal of possibilities,’ says Mark Wightman from the University of North Carolina at Chapel Hill, US. However, he adds that ultimately the technique’s utility will depend on it being made accessible for biologists.

The probes are made by growing nanowires of silicon and then exploiting a method developed by Lieber’s group last year to insert controlled 120? kinks in the growing wire. The team can also engineer the electronic properties of the probe by varying the materials each part is made from. ’On the arms - because we want them to be very conducting - we mix in a lot of phosphorus dopant with the silicon,’ Lieber says, ’but at the tip where we want to introduce the semiconducting nanotransistor, we use a much lower dopant concentration.’

So far, Lieber’s group has shown that the probes can be used to measure changes in electrical potential outside, inside and across cell membranes, and pH changes. Wightman is intrigued by the possibility of using similar probes to measure other chemical processes. ’They’ve got the device,’ he says, ’now it’s just time to decorate it with chemistry that allows them to measure other things.’