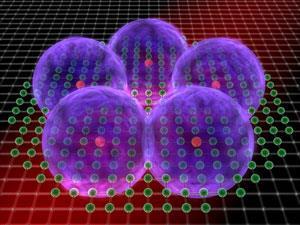 The very existence of our universe rests on the precise difference between the mass of protons and neutrons. Now, scientists in Germany have calculated this value to a high level of precision and may also be able to explain why it even exists in the first place.

Previous measurements of the mass difference between the neutron and its lighter, positively-charged counterpart suggest it is approximately 0.14% of the nucleons’ average masses. But scientists have long been seeking a more precise figure. If this value had been slightly lower, the big bang may have produced too much helium and stars would never have ignited. Slightly higher and the heavier elements would have never formed.

A team based at the University of Wuppertal has now provided the most accurate calculation of the difference in mass between protons and neutrons by combining lattice quantum-chromodynamics and electrodynamics (QCD-QED) modelling to look at the atom’s fundamental building blocks – quarks and gluons. In doing so, the total mass difference was found to be 1.51 ± 0.3MeV. Past QCD-QED studies have been unable to achieve this resolution, yet experimental measurements place the difference at 1.2933322MeV. The researchers argue that the fundamental difference in neutron–proton mass may be down to a competing effect between electromagnetic forces and the mass of quarks.