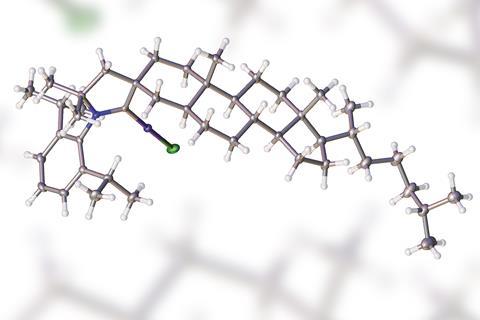 For the first time, chemists have successfully applied a chiral cyclic carbene as a ligand in a copper-catalysed borylation reaction.

Cyclic carbenes are stable and display even stronger σ-donating properties than N-heterocyclic carbenes (NHCs). Their chiral centre is adjacent to the carbene, creating a unique steric environment.

In 2005, a team around Guy Bertrand from the University of California, US, developed a strategy to synthesise cyclic (alkyl)(amino)carbenes (CAACs). They made a chiral CAAC based on (–)-menthol and employed the ligand in various asymmetric catalytic reactions without any success. In a borylation reaction, the complex showed excellent catalytic activity with an almost complete lack of asymmetric induction. Now, over a decade later, the team discovered that the menthyl ring of the ligand, previously believed to be rigid, readily flipped between two different chair conformations. When employing the ligand in asymmetric transformations, the two conformers gave opposing enantiomers of the product, cancelling out the expected enantiomeric excess. This insight prompted the team to make the more a rigid CAAC.

Their new CAAC is made from 5α-cholestan-3-one, a steroid offering increased rigidity by its extended structure. They tested it in a copper-catalysed asymmetric conjugate borylation reaction and found that it efficiently catalyses the addition of bis(pinacolato)diboron to various β-substituted α,β-unsaturated esters, affording the corresponding 1,4-adducts in moderate to good yields, with enantioselectivities reaching 55%. 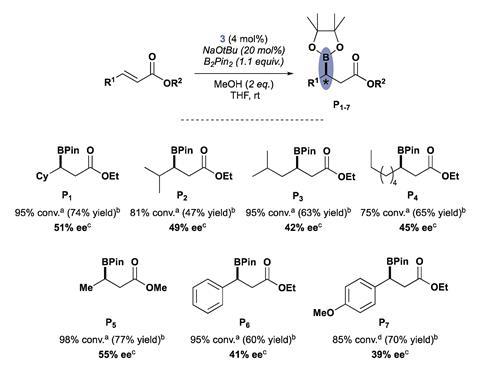 Transition metal-catalysed borylations have emerged as reliable strategies to access chiral organoboron compounds, which play an important role in synthetic chemistry. The introduction of chiral cyclic carbenes as ligands for transition metal catalysts opens up opportunities for the development of new catalytic asymmetric transformations.