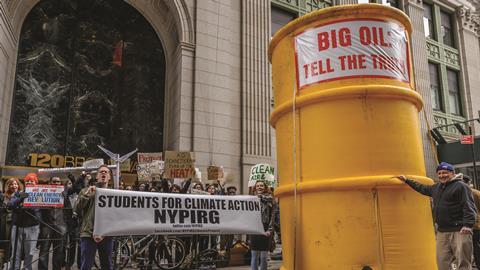 ExxonMobil has rejected claims by two Harvard University researchers that the company misled the public over climate change. The researchers say they found a discrepancy between what ExxonMobil’s scientists and executives discussed about climate change privately and in academic circles, and what it presented to the general public.

Geoffrey Supran and Naomi Oreskes of the department of the history of science examined 187 climate change documents from ExxonMobil published between 1977–2014. These included peer reviewed and non-peer reviewed publications, internal company documents and paid, editorial-style advertisements in the New York Times. They looked at whether these communications sent consistent messages about the state of climate science and its implications, comparing their positions on climate change as ‘real’, ‘human-caused’, ‘serious’ and ‘solvable’.

In all cases, the researchers found that as documents became more publicly accessible, they increasingly communicated doubt. For example, 83% of peer reviewed papers and 80% of internal documents acknowledged that climate change is real and human-caused, yet only 12% of advertorials did so, with 81% instead expressing doubt.

‘The company’s peer reviewed, non-peer reviewed and internal communications consistently tracked evolving climate science, broadly acknowledging that global warming is real, human-caused, serious and solvable, while identifying reasonable uncertainties that most climate scientists readily acknowledged at that time,’ they write. ‘In contrast, advertorials in the [New York Times] overwhelmingly emphasised only the uncertainties, promoting a narrative inconsistent with the views of most climate scientists, including ExxonMobil’s own.’

The researchers also considered how the company handled the issue of ‘stranded’ assets, fossil fuel reserves that the company may be forced not to exploit. They found that ExxonMobil acknowledged and discussed the risks of stranded assets in 24 documents, but this topic did not appear in any advertorials.

In response, Suzanne McCarron of ExxonMobil has written to the New York Times. ‘Our statements about the risk of climate change have always been consistent with our understanding of climate science,’ she wrote. She points out that Oreskes and Supran are both involved in the anti-fossil fuel movement, and have acknowledged that earlier allegations that ExxonMobil hid its climate science research were wrong. ‘So they’ve now shifted to a new thesis by admitting that our research was accurate and even contributed to climate science, but erroneously alleging other statements were misleading. Their own study argued our scientific data are “highly technical, intellectually inaccessible for laypersons and of little interest to the general public or policymakers”. I’ll leave it to your readers to figure out the twisted logic of an allegation that we misled on climate change while advancing climate science at the same time.’

Benjamin Sovacool, professor of energy policy at the science policy research unit at the University of Sussex, UK, says such tactics to undermine public understanding of science are commonplace. ‘We have seen this not only with petroleum and fossil fuels, but also nuclear power, tobacco and chlorine chemicals. All are examples of where industrial interests can impede desirable transitions, to the detriment of wider social priorities.’