Researchers in the US have discovered a new class of biomolecule – dubbed glycoRNA – on cell surfaces in a range of animals including humans. The finding is a complete surprise to scientists who remain unsure what these molecules actually do in the body, but they could play a previously unexplored role in health and disease.

Sugars called glycans are central to all life. They usually exist outside cells or on cell surfaces and they regulate many cellular functions, including embryo development and host–pathogen recognition. They do this by attaching to and modifying proteins and lipids through a process called glycosylation. Proteins and lipids are abundant on cell surfaces and previously no other biomolecule was considered to be a target for glycosylation. But now it turns out that glycans interact with RNA as well. It’s particularly surprising because RNA is associated with processes inside cells.

Ryan Flynn in Carolyn Bertozzi’s lab at Stanford University made the discovery while exploring the potential for an enzyme to glycosylate RNA. For two decades, Bertozzi has pioneered bioorthogonal chemistry techniques that enable glycans and their interactions with proteins and lipids to be studied in real time in living systems without interfering with biological processes. 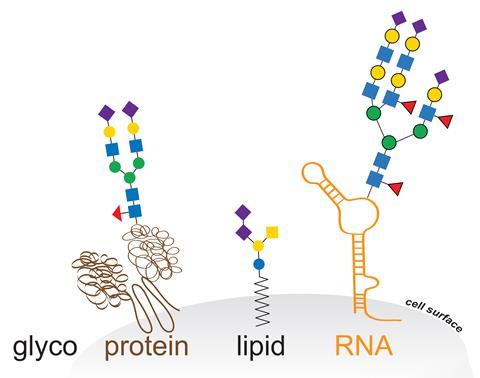 ‘The beauty of this chemistry is that it is flexible for any experiment it is applied to,’ says Bertozzi. ‘Thus, when Ryan framed the question to ask about RNA on glycans, he was able to use this bioorthogonal chemistry technology to see if glycans were attached to RNAs, and they were.’

Flynn’s main experiment centred around the enzyme glycosyltransferase and RNA but they didn’t observe glycosylation. However, a control experiment inadvertently delivered the goods. The control had used cells labelled with a reporter molecule. It was a control because this label tracks glycans where RNA isn’t usually found, specifically in the golgi apparatus where proteins and lipids are packaged before being sent out of the cell. However, the reporter molecule provided strong signals, indicating RNA glycosylation. Further experiments with human, mice, hampster and zebrafish cells confirmed the presence of glycoRNA, suggesting the biomolecule is common to life.

‘It was both unexpected and exciting,’ says Flynn who is now at Harvard University. ‘It immediately led to a huge number of new questions.’ Since glycoproteins and glycolipids play a role in a range of biological processes in animal, plant and microbial cells, the researchers suspect glycoRNA has a similarly important function.

‘With the data we have, we are currently considering its role in cell surface biology such as cell to cell communication and possibly operating to interact with regulatory receptors in the immune system called Siglec proteins [associated with the autoimmune disease lupus],’ explains Bertozzi.

‘The results are baffling and intriguing,’ comments Laura Kiessling who investigates cellular carbohydrate chemistry at the Massachusetts Institute of Technology, US. ‘Specifically, N-glycosylation occurs in the endoplasmic reticulum and then the Golgi. Given the localisation and the process, how RNA could become glycosylated through this pathway is completely unclear.