Carnitine, not cholesterol, may be responsible for red meat's link to heart disease 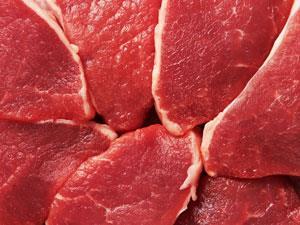 The link between red meat and poor heart health has traditionally been blamed on cholesterol, but new evidence suggests this isn't the whole story. US researchers found that carnitine, a nutrient found in red meat, is converted into a metabolite that promotes cardiovascular disease by gut bacteria. This may mean that the popular practice of taking carnitine supplements to build muscle is unwise.

‘The cholesterol and saturated fat content of red meat is not sufficient to account for increased cardiac risk,’ says lead author Stanley Hazen of Cleveland Clinic, Ohio. ‘There’s always been an argument that something else is contributing to that association.’

He says that he began to suspect carnitine when investigating trimethylamine N-oxide (TMAO), which promotes atherosclerosis – hardening of the arteries – in mice by altering cholesterol metabolism. TMAO is produced by gut bacteria when they break down choline, a trimethylamine-containing compound found in the head of phospholipids. Hazen and his colleagues suspected that carnitine, which also contains trimethylamine, was processed in a similar way by TMAO-generating bacteria. They confirmed this using a radioactive label to trace the fate of carnitine eaten by volunteers, which was subsequently detected in TMAO in the blood.  Mouse studies then revealed a link between carnitine and atherosclerosis, although carnitine itself did not appear to have a direct effect.

‘We found that if you add carnitine to the diet you get enhanced atherosclerosis, but only in the presence of intact gut flora,’ explains Hazen. ‘If you give the mice broad spectrum antibiotics and suppress their ability to make TMAO, dietary carnitine has no effect.’

The team also surveyed over 2500 people and found a significant association between blood carnitine levels and cardiovascular disease risk, even after controlling for other risk factors.

Victoria Taylor, a senior dietician at the British Heart Foundation, says this is an interesting discovery. ‘The findings won’t necessarily mean a change to existing recommendations,’ she says, ‘but this has served up a good reminder for us to think about alternative sources of protein if we eat a lot of red meat.’

Those taking carnitine pills as a dietary supplement may also be at risk, notes Hazen. Though currently marketed as an aid to weight loss or muscle building, its effects on heart health have never been investigated. ‘Our data suggest that if you chronically ingest carnitine you’re shifting your metabolism and becoming more susceptible to cardiovascular disease,’ he says. ‘I think more studies are needed to look at the safety of long-term supplementation.’