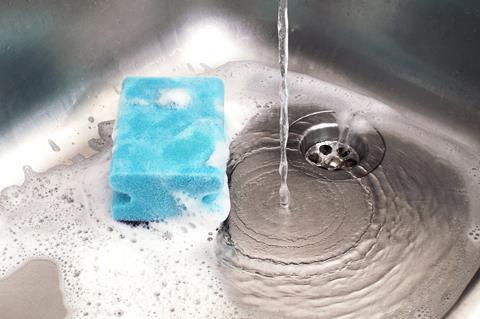 Researchers have shed new light on the fluid mechanics of hydraulic jumps, a common water phenomenon that is likely overlooked every time we turn a tap on but is a staple in textbooks and was even documented by Leonardo da Vinci in the 16th Century.

Since the 19th century all types of hydraulic jump were thought to be determined by gravity. Now Rajesh Bhagat and colleagues at the University of Cambridge, UK, have shown that small-scale circular thin-film hydraulic jumps – the kind we see when tap water spreads out upon hitting a sink – are actually down to energy loss from surface tension and viscosity.

‘We are absolutely delighted that finally we understand this type of hydraulic jump and we can predict it very accurately,’ says Bhagat. ‘I think it is surprising and was unexpected to everyone that surface tension determines the thin-film hydraulic jump because it is such a weak force.’

Bhagat made the discovery while studying liquid jets that impact on a surface to create a thin boundary layer – such jets are often used in industrial cleaning and cooling applications. When he fired water jets onto a vertical surface he noticed that circular hydraulic jumps formed and decided to investigate. If gravity was at play, the shapes of jump would have differed at different orientations but experiments revealed that if a water jet was fired normally, the same size and shape of hydraulic jump was seen irrespective of the orientation of the surface, even if the jet was fired was upwards against the direction of gravity.

Suspecting that surface tension and viscosity could be responsible, the team devised experiments that varied these parameters using jets of different mixtures of water and alcohol solutions and a surfactant. This led to a new theory that could predict the size of circular hydraulic jumps based on viscosity and surface tension, which the researchers confirmed by comparisons with their data as well as the existing literature.

‘It’s a very nice piece of work, with a particularly clean and lucid analysis,’ comments Douglas Natelson, a physicist at Rice University in the US. ‘The new work generalises the analysis to include surface tension as well as gravity, and can now cover both limits, both the large-scale jumps in canals and the small-scale ones in your sink.’

Bhagat suggests this new understanding could cut down water usage in industrial systems that use high-power jets and possibly even domestic showers. ‘Knowing how to manipulate the boundary of a hydraulic jump is very important because most of the action happens in the fast-moving thin liquid film before the hydraulic jump,’ explains Bhagat. ‘Now with this theory we can easily extend or reduce the boundary so it can help to predict and design new water-efficient cleaning and cooling systems.’