A drug being developed by Denmark’s Santaris Pharma could provide a breakthrough in the treatment of hepatitis C, and positive results in a study on chimpanzees point to its potential to avoid drug resistance.

Standard treatment for hepatitis C virus (HCV) uses a combination of interferon-alpha and ribavirin, but up to half of patients do not respond to interferon, and there are unpleasant side-effects. Many different small molecule antivirals are under development, but the problems with interferon remain. If successful, Santaris’ SPC3649 may be able to replace it in anti-HCV cocktails.

The drug targets the microRNA miR-122, which is naturally expressed in liver cells. The virus needs miR-122 to replicate; it binds to two sites on the virus’s RNA. Blocking miR-122 should, therefore, prevent the virus from replicating. In the chimpanzee study1, carried out by Robert Lanford at the Southwest; National Primate Research Center in San Antonio, US, and colleagues, SPC3649 did indeed block miR-122 in four animals infected with hepatitis C. The result was a long term reduction in disease symptoms and, importantly, there was no sign of resistance developing. 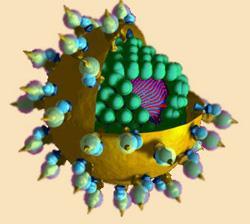 ’Most of our trials in chimpanzees span about five days, and after about three days resistance starts to come up,’ Lanford says. ’In this trial, we dosed for 12 weeks, suppressed the virus more than 350-fold, and saw no resistance.

The level of virus continued to be suppressed for several months.’ He puts this long-lasting effect down to the technology used to make the drug - it is a locked nucleic acid, where an extra carbon-carbon bond is introduced into the RNA structure, fixing its conformation.

According to Henrik ?rum, chief scientific officer at Santaris, the drug could become an additional element in antiviral treatments. ’While many new direct-acting antivirals are well-tolerated and effective, the virus can outrun them quite quickly,’ he says. ’SPC3649 could replace interferon, and be given with some of the new direct acting drugs. Virologists agree that hitting the virus hard with different modes of action is the way forward, and you want to bring drugs into the cocktail that are well tolerated and effective.’

Phase I trials in healthy human volunteers are already under way, and should be completed by the end of next year. The next step is trials in infected patients. ’These are early days, but I think the data we’ve already amassed in Phase I trials and the chimpanzee study are solid, and suggest that this might, in time, be a major new drug for hepatitis C,’ ?rum says. ’We are hopeful.’

’If it is able to restore interferon responsiveness, or get a response in non-responders, that would be fantastic,’ says Clifford Leen, an infectious disease specialist at the Western General Hospital in Edinburgh, Scotland. ’It’s too early to say whether it could replace interferon therapy. Ideally, we want to eradicate the virus.’ But with patients with 40 million copies of the virus, questions such as whether the new treatment could drive this down to undetectable levels, and whether patients would need to remain on the therapy in the long term will be very important, says Leen.