The mode of action of a rare natural product with promising cytotoxic activity has been revealed by scientists in the US - while a UK group have come up with a particularly efficient chemical synthesis.

Sergey Kozmin and colleagues at the University of Chicago have revealed the way marine natural product leucascandrolide A targets tumour cells and pathogenic yeasts [1]. The Chicago team were able to study the compound’s bioactivity by developing a new synthetic route to a simplified leucascandrolide A analogue.

Meanwhile, Andrew Evans and colleagues at the University of Liverpool have completed a particularly efficient synthesis of the key macrolactone portion of the molecule, providing the compound in just 14 steps and with an overall yield of 20 per cent [2]. The route will provide good access to new analogues of the molecule, says Evans - which, combined with the new understanding of its bioactivity, means it can now be developed as a potential drug.

Leucascandrolide A was first isolated in 1996 from the Leucascandra caveolata sponge, collected from the Coral Sea. The compound showed promising activity against certain tumour cells, as well as a pathogenic yeast that can infect AIDS patients. But a lack of material has prevented further studies, and subsequent attempts to isolate the natural product from the same sponge species have failed. 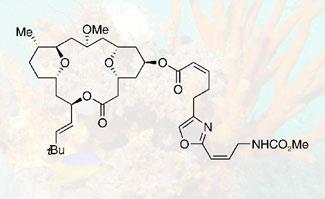 Scientists now suspect that bacteria growing on the original sponge - perhaps present because the sponge was dying - may have produced the compound, ruling out any natural supply route for the compound. Chemists’ initial attempts to build leucascandrolide A in the lab gave lengthy synthetic sequences that weren’t able to supply it in useful quantities - until Kozmin and Evans’s new synthetic approaches to the molecule.

Kozmin screened his analogue against a library of 4,900 yeast strains, assessing its impact on growth inhibition. The team identified mutant strains particularly sensitive to the compound, eventually discovering that it inhibits the cytochrome bc1 complex, used by the cell to make ATP, a crucial energy source.

’Kozmin’s analogue has very interesting bioactivity,’ says Evans. ’Its activity is down at the micromolar concentration level, and that’s for a stripped down analogue of the natural product - this has all possibility of being a very promising drug target. And it works by an interesting mechanism, blocking ATP which triggers the cell to go into apoptosis and die.’

The key step in Evans’s new synthesis is the novel multi-component bis-esterification reaction, involving both a Lewis acid and a Bronsted acid catalyst, to put together the two six-membered tetrahydropyran rings that form part of the final macrolactone.

’Evans’s synthesis is quite efficient indeed and could be certainly useful for making new unnatural analogues, similar to those that we have made,’ Kozmin told Chemistry World.

Evans estimates his synthesis could be adapted to make Kozmin’s analogue in around 10 steps, and as a single enantiomer. Evans says he will likely use his new route to make further leucascandrolide analogues.