New kind of bond hidden in all animals

After 25 years of research, US chemists have identified a unique chemical bond that holds together type IV collagen dimer molecules. The sulfilimine (N=S) bond has never been observed in biological molecules before, but is responsible for the strength of these collagen networks in all animals from sea sponges to humans and could be the key to the treatment of autoimmune disease Goodpasture’s syndrome. 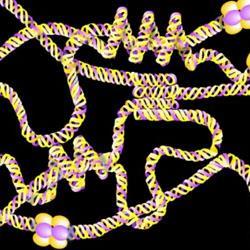 Billy Hudson, from Vanderbilt University in Tennessee, has dedicated years of research to collagen IV, the major component of basement membranes on which tissues are built up. Various x-ray crystallography and mass spectrometry studies have hinted at the possible nature of the bond between the two halves of the molecule, but its exact nature has never been pinned down until now. ’We knew there was a covalent linkage,’ Hudson says, ’but not what kind of bond.’

There are over 28 different types of collagen, and type IV comprises two halves, each made up of three protein subunits with a triple-helix collagen ’tail’ and non-collagenous protein ’head’ groups. The two head parts lock onto each other (linked by the sulfilimine bond) and the collagen tails intertwine with neighbouring strands to form a structural network to which tissues can be anchored.

The sulfilimine linkage is formed between the sulfide group of a methionine residue on one of these head groups and the amine group of a modified hydroxylysine residue. One of the key pieces of evidence that pointed towards the sulfilimine bond, says Hudson, was the fact that the dimer has a mass of exactly two units less than the two component proteins - meaning that the two hydrogen atoms of the hydroxylysine amine group were no longer present. ’We used some of the highest resolution mass spectrometry available, which can pick up differences of 0.001 mass units [in a protein with a mass of 5000], and the difference is definitely two,’ he adds. 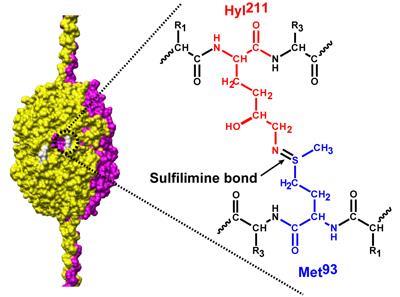 The team combined this mass data with NMR (nuclear magnetic resonance) spectroscopy, which can give more information about the chemical environment around individual atoms. Importantly, the 13C-NMR signal for the methyl group on the relevant methionine was in a completely different place to normal, and was more comparable with carbon nuclei next to sulfilimines in synthetic molecules. ’Sulfilimine bonds can also be reduced [using thiols] to the original sulfide and amine,’ says Hudson, ’and when we reduce this bond we recover methionine and hydroxylysine,’ showing that the collagen linkage behaves chemically like a sulfilimine.

’Covalent crosslinks are well known for collagen molecules,’ says Manuel Than from the Fritz Lipmann Institute in Jena, Germany, ’but the chemistry of this particular bond has been puzzling chemists for a long time.’ Than was involved with a group from the Max Planck Institute for Biochemistry in Martinsried, Germany, that studied the x-ray structure of collagen IV in 20022 and 2005,3 and explains that the crystallography showed some electron density between the methionine and lysine residues, but the x-ray analysis could not probe the precise chemistry of the bond.

’[The sulfilimine bond] is not a standard chemistry known for proteins, but it would fit well with the electron density we found, and it would fit much better than the previous suggestions,’ adds Than, ’but it would be nice to see this kind of chemistry being done between isolated methionine and lysine to show that the chemistry takes place.’

Hudson believes that the sulfilimine bond is made between the two halves of the dimers by an enzyme, and that finding that enzyme could provide some insight into treatment of certain cancers and the autoimmune disease Goodpasture’s syndrome, in which antibodies target the collagen IV molecules. The Goodpasture’s antibody cannot bind to collagen IV dimers, only the dissociated monomers, so Hudson thinks that the disease could be caused by a defect or inhibition of the enzyme that forms the sulfilimine linkage.

He also suspects that sulfilimine bonds could be found in other biomolecules, now that people know to look for them, saying: ’Once you discover a novel bond that turns out to be present in all animal tissues, you know you’re onto something Nature built that’s probably important!’