Nickel nanoparticle catalysts decorated with nickel oxide layers could be used to selectively synthesise fuels and other chemicals under mild reaction conditions with the help of sunlight. The Chinese team were able to produce hydrocarbons up to seven carbons in length at room temperature by hydrogenating carbon monoxide. Normally, this reaction yields methane as the main product in the presence of nickel catalysts. 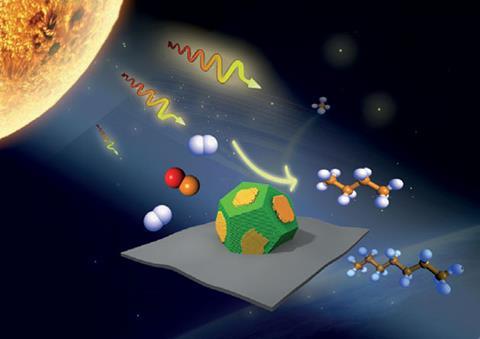 ‘Our nickel–nickel oxide photocatalysts exhibit a very high selectivity to C2–C7 hydrocarbons compared with nickel oxide and metallic nickel catalysts under the same conditions —and a very high selectivity [for compounds containing more than two carbons] compared to other mono-metallic nickel-based catalysts,’ says Tierui Zhang from the Technical Institute of Physics and Chemistry in Beijing, who led the team. The researchers tested their new materials in a photochemical version of the Fischer–Tropsch synthesis (FTS), which is commonly used to produce liquid fuels from carbon monoxide and hydrogen contained in coal, natural gas or biomass.

‘Typically, FTS is carried out at high pressures and temperatures between 150 and 350°C,’ explains Zhang. ‘The system we developed works under visible-light irradiation at ambient temperature and uses only Earth abundant elements.’ The scientists prepared the photocatalysts by stepwise reduction and calcination of nickel-containing layered materials at different temperatures. They found that the formation of long hydrocarbons requires catalysts with a particular structure.

‘The key point is to find a suitable photocatalyst that drives the process to the wanted reaction products,’ explains Hermenegildo García, a photochemist at the Polytechnic University of Valencia in Spain. ‘In this case, it was found that the combination of nickel in the metallic state with some overlayers of its corresponding oxide is highly active and selective for the conversion of carbon monoxide into hydrocarbons other than methane.’ Density functional calculations revealed that the oxide overlayers altered the electronic structure of the nickel nanoparticles, changing the reaction pathway and promoting C–C coupling reactions on the photocatalyst surface.

The authors demonstrated that the selectivity of the new materials can be tuned by varying the reduction temperature. The catalyst synthesised at 525°C exhibited the best performance under visible-light irradiation, with a selectivity for higher hydrocarbons of over 67% after three hours.

García believes that further studies using carbon dioxide as the starting material will follow. ‘One step forward in the direction of the present work will be to use carbon dioxide rather than carbon monoxide as feedstock. I am sure that in the next years, a similar process to the one reported here, but based on carbon dioxide, will be developed.’