A new way to turn alkenes into alkyl nitriles and vice versa without the need for dangerous hydrogen cyanide gas has been developed by chemists in Germany. The process could enable synthetic chemists to explore new molecules by performing reactions more safely without specialist setups. And one day the work might help to phase out hydrogen cyanide use in bulk chemical production. 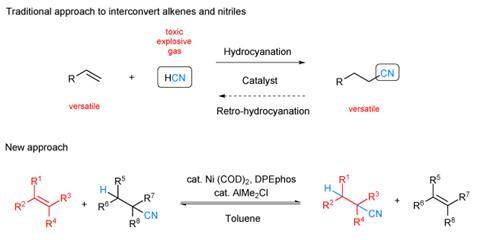 The hydrocyanation reaction, in which an alkene is transformed into the corresponding alkyl nitrile by the addition of hydrogen cyanide across the carbon–carbon double bond, is important to several industries. For example, about 1 million tonnes of adiponitrile, a precursor to nylon, are produced every year by hydrocyanation. It is also useful for more sophisticated synthetic chemistry as the electron-withdrawing nature of the nitrile group alters the reactivity of the carbon chain. Unfortunately, hydrogen cyanide is highly volatile, toxic, corrosive and explosive.

In the new reaction, devised by synthetic chemist Bill Morandi and colleagues at the Max Planck Institute for Coal Research in Mülheim an der Ruhr, Germany, the nitrile group is transferred between two hydrocarbon molecules, turning an alkyl nitrile into an alkene and vice versa, until the reactants reach a thermodynamic equilibrium. The equilibrium can be driven in either direction by judicious choice of reagents and conditions. The reaction – catalysed by nickel with an aluminium-based co-catalyst – can synthesise a wide variety of hydrocyanates. Some have medicinal applications, such as precursor chemicals to the anti-inflammatory nabumetone and the antihistamine pheniramine.

‘The most immediate applications of the chemistry will naturally be in research and development and also in fine chemicals production,’ says Morandi. ‘The safety argument is really nice for people working in the laboratory, who might not have access to the necessary safety equipment and conditions to use hydrogen cyanide gas as a reagent.’ Before the reaction is likely to be attractive to industry for bulk chemical synthesis, he says, ‘there are a few things that have to be further developed’ such as minimisation of the concentration of catalyst required and recycling of the alkene by-product.

Catalysis chemist Clark Landis of the University of Wisconsin-Madison describes the work as ‘very interesting’. He agrees that the primary applications are likely to lie in research, although he adds: ‘It’s always possible that at, say, a pharmaceutical company they may have a need for a nitrile. This would be a way of producing it in the general-use synthetic facilities of pharmaceutical companies, where using hydrogen cyanide would be unthinkable.’