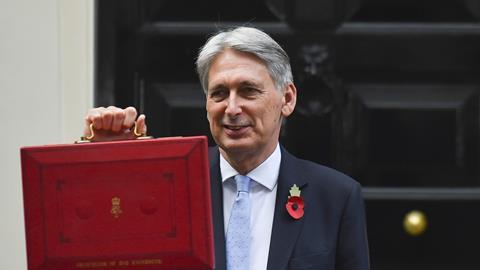 In a UK budget statement dubbed the ‘big giveaway’ by British media, chancellor Philip Hammond has announced several increases to public spending in an effort to show the austerity of recent years is coming to an end. New funds have been promised for the National Health Service, schools and infrastructure, alongside cuts to income tax. Amongst the various spending commitments is a plan to ‘strengthen the UK’s global leadership in science and innovation’.

This year’s budget allocates an additional £1.6 billion investment for science and innovation, which will include a new £50 million annual fund for government–industry joint programmes that address ‘pressing challenges’ such as public health and cybersecurity, as well as investments in quantum technologies (£235 million), future manufacturing (£121 million from the Industrial Strategy Challenge Fund), and the development and commercialisation of nuclear fusion (£20 million in 2019–20 for the UK Atomic Energy Agency).

Other allocations include £150 million for international research fellowships to ‘attract, retain and develop world-leading research talent’, £50 million of which will go towards Turing AI Fellowships for leading researchers in artificial intelligence.

£120 million will be invested through the Strength in Places fund to support ‘clusters of excellence’ in R&D across the UK, and funding for digital catapult centres and the medicines discovery catapult will be extended by £115 million. The government will also invest £5 million creating up to 10 University Enterprise Zones.

‘This budget hints at a welcome approach of deploying government to stimulate and make best use of research and innovation itself,’ said Sarah Main, executive director of the Campaign for Science and Engineering. ‘The government’s commitment to increase spending on R&D across the economy to drive productivity and to produce better outcomes for people from public and private sector R&D will surely be a big win.’

However, she cautioned that additional investment is needed if the government wants to be on track to hit its 2.4% of GDP target for R&D investment in 2027. Last year the organisation calculated this would require another £500 million of investment in 2020–21 and an extra £1.7 billion in 2021–22.

Venki Ramakrishnan, president of the Royal Society, also expressed concern over the government’s ability to meet its own target. ‘This budget does not provide any more clarity on how it is going to get there. In particular, there is no commitment on what fraction of the 2.4% will come from government spending,’ he said, although he broadly welcomed the announcement of new spending.

Ramakrishnan added that Brexit could undermine these plans if Britain leaves the EU without a deal, and said the UK should seek the ‘closest possible association’ with Horizon Europe, the EU’s next research funding programme. The Royal Society has previously warned that the UK stands to lose over £1 billion per year in EU research funding.

‘As the UK leaves the EU, it is vital that the right arrangements are in place for scientific collaboration and cooperation, including mobility for scientists,’ said Helen Pain, deputy chief executive of the Royal Society of Chemistry. ‘While the chancellor has announced £150 million for fellowships to attract the brightest talent to the UK, to maintain the UK’s leading position in the chemical sciences, we need to see continued participation in the EU science and innovation framework programmes, easy movement of scientists between the EEA and the UK, and continued close collaboration with the European Chemicals Agency.’

Pain also called on government to ensure investments in science are ‘balanced’. ‘Whilst challenge-driven research funding, such as the Industrial Strategy Challenge Fund, is needed for specific problems and commercialising ideas, fundamental research is what brings about new knowledge and transformative discoveries that drive growth,’ she said.