Chemists around the world have discovered several new twists to improve the performance of asymmetric catalysts in hydrogenation reactions. 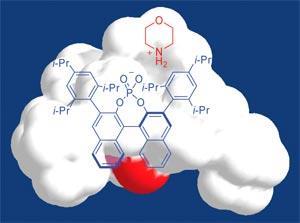 Sonja Mayer and Benjamin List at the Max-Planck Institute of M?lheim, used chiral anions (combined in a salt with achiral cations) to guide a hydrogenation reaction in one specific direction. By studying the hydrogenation of carbon-carbon double bonds in a series of unsaturated aldehydes, they found that a complex chiral phosphate derivative known as TRIP achieved enantioselectivities between 98 and 99 per cent for six of the seven compounds they studied, which, according to the authors, is the best result ever observed for this kind of reaction.1

Catalysts that selectively favour the synthesis of one enantiomer (mirror-image version) of a desired molecule over the other are of paramount importance for the pharmaceutical industry, Mayer and List explained. Their catalyst allowed them to perform the first asymmetric synthesis of the natural compound 2,3-dihydrofarnesal, which is both an insect pheromone and a plant fragrant.

List is optimistic that the method will be used more generally. ’We hope this is just the first example of a series of applications of asymmetric counteranion directed catalysis (ACDC), which we believe is a novel and very promising strategy for asymmetric synthesis,’ List told Chemistry World.

In another study Mabel Caipa and Dieter Vogt at the University of Eindhoven developed catalysts whose very symmetry gives them an edge in asymmetric catalysis of the hydrogenation reaction. They created new tris-oxazoline and tris-imidazoline ligands with a threefold rotational symmetry for the ruthenium catalysed hydrogenation of ketones.2 ’C3 symmetry leads to a reduced number of   conformations a catalyst can adopt and thereby restricts the number of possible reaction pathways, which may have an influence on stereoselectivity,’ Caipa explained.

Kuiling Ding and colleagues at the Shanghai Institute of Organic Chemistry, China, addressed the problem of catalyst recovery by engineering a known rhodium catalyst into a self-assembling polymer that forms solid microparticles and can thus be separated from the reaction medium. They coupled a well-known assymetric catalysis ligand, MonoPhos, with a self-complementary hydrogen bonding unit often used in supramolecular chemistry. When the rhodium complexes were added, the constructs aligned to form linear chains which displayed the catalytic activity expected of comparable complexes in solution. Even after 10 filtrations, the recycled catalyst showed almost no loss of chiral selectivity. There was some loss of activity, however, which they blame on the separation conditions and hope to avoid by building a continuous flow reactor.3

Ding appears confident that his new approach4 will bridge an age-old cultural divide: ’We hope that the concept [of] heterogenisation of homogeneous catalysts may provide a new approach to bridge the gap between homogeneous and heterogeneous asymmetric catalysis and stimulate further research on the development of practical processes for the syntheses of optically active products,’ he said.