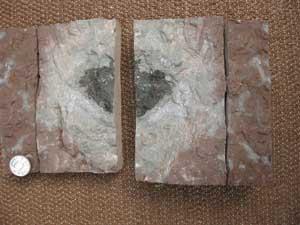 The first of a brand new type of meteorite has been found in a limestone quarry in Sweden.

The team who made the discovery say it could be the first example of an ‘extinct’ meteorite – one that comes from an object that has been destroyed by collisions and therefore no longer exists. A team led by Birger Schmitz from Lund University found the 8cm-wide rock black rock embedded in red limestone that is known to be about 470 million years old.

The meteorite was found alongside many others, which are classified as L chondrites. These all come from the same asteroid that broke up hundreds of millions of years ago following a collision. When they analysed the black rock Schmitz and his colleagues found it was very similar in age but chemically distinct from the L chondrites, and its isotopic composition of oxygen and chromium did not fit any of the existing categories used for meteorites. They think it could be the only known fragment of the asteroid that collided with and broke up the L chondrite parent body, which must have been almost completely destroyed in the process.

With so little to go on, not much is known about the new meteorite’s origins. It is impossible to tell – for example – whether its parent body was already a fragment of a much larger object at the time it collided with the L chondrite asteroid. But Schmitz and his colleagues say it is possible that more fragments exist and are waiting to be found, both on earth and in space.