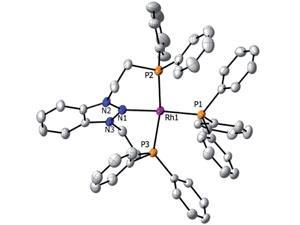 Everyone knows that like charges repel one another. But unusual coordination compounds bearing cationic ligands bound to cationic metals have been prepared by scientists in Israel, opening up fresh opportunities for organic transformations.

When two positively charged chemical species are brought together they experience counteracting forces. One is Coulombic repulsion, and the other is attraction due to the bonding interactions between the nuclei of one cation and the electrons of the other. Thermodynamically unstable bonds ensue from the interplay of these opposing interactions.

Rather than being thermodynamically stable, the transition metal complexes made by Mark Gandelman from the Israel Institute of Technology in Haifa and colleagues manage to be kinetically stable. Pincer-type ligands with nitrenium moieties at their centre, that are essentially the nitrogen analogues of N-heterocyclic carbenes, are central to the complexes' creation. Computational investigations reveal that the coordination geometry of the pincer ligand provides the kinetic barrier to dissociation of the nitrogen–metal bond; the two phosphine arms aid coordination by bringing the metal within close proximity of the central nitrogen.

Organic chemist Gerard van Koten, of Utrecht University in the Netherlands, agrees that this clever chemistry has much scope for application. ‘The novel nitrenium metal–d8 complexes, containing an extremely rare L+–M+ interaction, are a spectacular demonstration of the power of the tridentate pincer ligand platform; the small kinetic stability of the central nitrenium cation–metal cation interaction is greatly enhanced by the flanking interactions of two ligand-to-metal bonds. These complexes provide a model for novel types of highly electrophilic, cationic metal catalysts.’