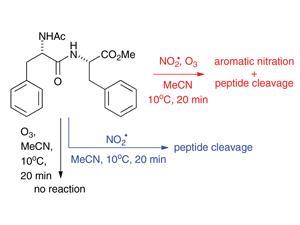 Environmental oxidants in both isolation and combination, can damage peptides to a larger extent than previously believed

Air pollution is widely known to be detrimental to our health, but now scientists in Australia have revealed new mechanistic insight into how particular pollutants interact with the human respiratory tract. Understanding this chemistry is vital for the successful development of pharmaceutical and technological strategies to combat these adverse health effects.

Uta Wille and her research group at the University of Melbourne, Australia, are specialists in free radical chemistry. In their efforts to understand environmental radicals and how they damage us, they have investigated the effects of exposing a series of dipeptides to NO2• and O3. Using these small molecules, which represent the building blocks of larger biological proteins (as in the RTLF), they have pinned down some of the precise chemical pathways by which damage occurs. They found that a synergistic effect exists between NO2• and O3, where their reaction to form nitrate leads to a host of other possible reaction products including toxic N2O5 and nitric acid.

‘One outcome of this study that I find particularly interesting,’ remarks Wille, ‘is that nitrogen dioxide can cleave peptide bonds. This has never been observed before and shows that peptides are much more vulnerable to these pollutants than previously believed.’

‘This is an important contribution for better understanding the effects of air pollution on public health,’ comments Manabu Shiraiwa, an expert in organic aerosols and oxidants at the Max Planck Institute for Chemistry in Germany. ‘Oxidation and nitration of amino acid residues by air pollutants may be a molecular rationale for the enhancement of allergic diseases by air pollution.’

Next Wille wants to study larger peptides containing other groups of amino acids, and model systems of lipids.  She adds, ‘In the long term, I hope to set up a collaboration with pharmacologists to do cell exposure studies to nitrogen dioxide and ozone, and analyse the products of these interactions.’