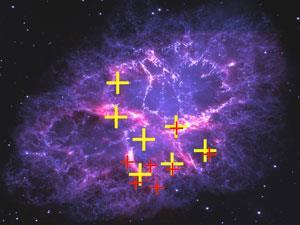 Composite image of the Crab nebula

Molecules containing a noble gas have been detected in space for the first time by astronomers in the UK. Mike Barlow and colleagues at University College London found evidence of argon hydride ions in infrared spectra from the crab nebula, the remnants of a star that exploded in 1054AD.

The measurements were taken by the SPIRE spectrometer on board the European Space Agency’s Herschel Space Observatory. Far-infrared radiation from several regions in the nebula, including the neutron star at its centre, showed strong peaks at 618GHz and 1235GHz, corresponding to argon hydride ions containing argon-36. By contrast, the dominant argon isotope on Earth is argon-40, which is formed by the radioactive decay of potassium. The team’s observations back up calculations supporting the theory that the argon-36 isotope originates from massive supernova explosions in space.