A new chewing gum that’s simple to remove and degrades much more easilythan traditional gum while retaining the familiar minty taste and consistency, has hit the US market this week.

In 2007, Terence Cosgrove and colleagues at the University of Bristol, UK, and spin-out company Revolymer first announced they had created a new gum which could be removed easily from most surfaces and was water dispersible. Since then, the team has worked on the gum’s formulation to turn it into a commercial product that can rival the taste and consistency of stickier leading brands. 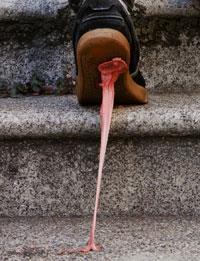 ’My research interests over the last 30 years have focused on how polymers interact with surfaces so it was not a leap into the dark when we started to work on this problem,’ says Cosgrove. ’The real motivation to invent the product came from seeing chewing gum on the streets in the UK and in America - it’s everywhere!’

Traditional chewing gums use poly(styrene-co-butadiene) or poly(ethylene-co-vinylacetate) as the gum base material. However, the properties of these materials mean that they stick to surfaces readily and are tricky to remove, even with detergents. The new gum, called Rev7, overcomes this because it also contains a new amphiphilic comb copolymer made up of a polyisoprene backbone and grafts of poly(ethylene oxide) (PEO).

’This amphiphilic graft copolymer will not only markedly reduce its adhesion strength to surfaces, but also will degrade into more water-soluble polymeric components that can easily be rinsed away,’ comments Stefan Bon, a polymer chemist at the University of Warwick, UK. ’To come up with such a dual approach solution is very clever, giving us a less sticky and cleaner living environment,’ he adds.

’Many surfactants form complexes with PEO such as sodium dodecyl sulfate, a common ingredient of soaps and detergents, and hence a mild detergent will remove our gum from many surfaces including clothes and carpets,’ says Cosgrove. The hydrophilic nature of the PEO which allows it to retain and to reabsorb water is also key for the gum’s degradation. ’The gum cud breaks down in water into small particles over six months, and hence will disperse into the environment,’ Cosgrove explains.

There should be no environmental risks since the polymer is made up of two ingredients that are used widely in other consumer products, including adhesives and medicines. The remaining ingredients are either inert or natural.

Safety tests revealed that the Rev7 polymer is as safe and inert as any other gum polymers for human consumption. ’We have been working very closely with the US and EU food safety regulatory authorities,’ says Cosgrove. ’We now have food safety approval in the US and are waiting for the EU approval currently.’