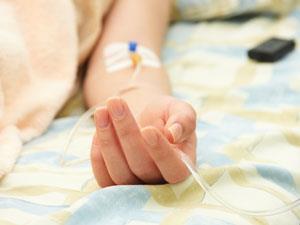 A new class of material has been created that bacteria find incredibly hard to stick to. An estimated 80% of infections acquired in hospitals involve sticky biofilms of bacteria that build up on surfaces and it is challenging is to reduce their growth on medical devices, such as catheters.

Inspired by high throughput drug discovery, a team of UK and US scientists printed hundreds of materials onto glass and tested whether disease-causing bacteria could stick to them. These polymer microarrays showed that coating silicone with non-stick materials reduced the bacteria coverage by over 95%, compared with a commercial silver hydrogel coating.

‘The materials used in the clinic at the moment, such as silicone rubber, were not designed as biomedical materials,’ says co-author Morgan Alexander at the University of Nottingham, UK. To stop the growth of biofilms, medical devices are often given toxic coatings to kill bacteria.

There was no link found between bacterial attachment and surface element composition, water contact angle or roughness in the first-generation array of 496 materials. The new class of materials are acrylate/methacrylate polymers and the six most resistant to bacterial attachment also contained cyclic or aromatic pendant groups, suggesting that these structures are vital.

The new structurally related materials substantially reduced attachment of opportunistic bacteria, such as Pseudomonas aeruginosa, Staphylococcus aureus and Escherichia coli. Coating silicone catheters with one such polymer reduced biofilm growth in tests with mice, compared with a control catheter. And unlike coatings which kill pathogens, the anti-attachment mechanism has the advantage that it should not introduce an evolutionary pressure that bacteria will seek to overcome.

The high throughput approach was an admission that we don’t understand biological responses to the surface and that it was best to access a wide range of materials, Alexander says. ‘This new class of materials is a complete revelation to us.’

‘A nice aspect of this work is the extension to in vivo assessment of a “hit” material, as all too often antibacterial coatings have shown promise in vitro but in vivo there was no analogous clear cut benefit,’ says Hans Griesser, professor of surface science at the University of South Australia. ‘While surfaces with broad antifouling properties, for example PEG coatings and analogous hydrogels, have been known for a while, this work has identified material surfaces with quite different, non-hydrogel compositions.’

Urinary catheters were targeted in this Wellcome-funded project. 'There is a significant rate of infection with them,’ explained Alexander, and the current strategy to reduce infection, mainly silver-based coatings, is ‘not very effective’. The next challenge is to persuade the medical device industry that the lab materials can be work in a clinical setting, Alexander says.