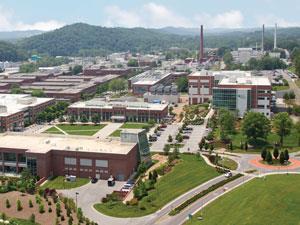 The Oak Ridge National Laboratory (ORNL) in Tennessee has decided to address an anticipated budget shortfall in 2014 by potentially offering voluntary layoffs for more than 10% of its workforce.

ORNL, which is run by the US Department of Energy (DOE) and employs approximately 4500 people, will extend these voluntary separation packages to up to 475 of its employees, says communications director David Keim. ‘We hope it’s less than that,’ he adds.

DOE funds the majority of the national labs, including part of the Lawrence Livermore National Laboratory. Back in May, the Livermore lab announced plans to offer nearly 10% of its workforce voluntary redundancy. It employed 6500 people and intended to offer these voluntary layoff packages to up to 600 of them.

‘The fiscal year 2014 budget is a mystery right now,’ Keim tells Chemistry World. ‘We know it’s going down, and we need to prepare for a lower budget.’ Lab employees who choose voluntary separation will have to leave the payroll by the end of the calendar year.

The lab’s emphasis is on cutting overheads and there is a desire to spare scientific staff as much as possible, according to Keim. In implementing these reductions, he says the lab will try to maintain the current balance where 60% of employees are directly funded by scientific programmes and 40% are support staff. ‘If we could cut overheads further, we would – like 62:38 – so we’d have more scientists,’ he tells Chemistry World.

These voluntary separations are open to all of the lab’s employees, but they will be most attractive to those planning to retire soon, or those who have seen their funding reduced and are increasingly reliant on overheads, Keim says. Specifically, Oak Ridge will be offering one week of payment per year of service, up to 25 years.

These reductions at Oak Ridge are driven by the pressures placed on federal R&D investment, including the across-the-board sequestration cuts. The lab expected that its fiscal year (FY) 2013 budget would be $1.6 billion (£1 billion), but it ended up closer to $1.5 billion. In addition, projections show that its FY2014 budget will be $1.4 billion. About 80% of Oak Ridge’s funding comes from the DOE and its Office of Science, which experienced budget cuts in FY2013.

‘We’re seeing this downward trend,’ Keim says. ‘We are trying to be conservative in our forecasting and management of our budget, and are trying to align staff with the lower budgets that we expect to come.’