President Obama has signed legislation to enable key US physical science agencies to enjoy consistent budget boosts over the next several years. Despite the news, academics are still wary about the future of support for research.

The president signed the American Competes Act reauthorisation without much fanfare on 4 January - the day before the new, more fiscally conservative Congress convened. 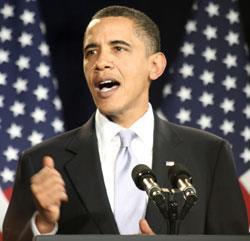 Obama has signed off on legislation that should support research - but will this really be the case?

The move was celebrated as a signal of the White House’s commitment to preserve America’s leadership in innovation, even amid growing agreement in Congress that the nation’s debt must be drastically reduced.

’It is an acknowledgement that the president is still committed to advancing the science and Stem [science, technology, engineering and mathematics] education agenda,’ says Glenn Ruskin, spokesman for the American Chemical Society.

The new law proposes to bolster US National Science Foundation (NSF) funding by roughly 20 per cent to reach $8.3 billion (?5.4 billion) in 2013, and while Ruskin notes that this does not maintain its original 10-year doubling trajectory, it aims to provide significant increases and sustained investments for the agency. ’This is a win in the current economic climate,’ Ruskin tells Chemistry World.

A budget increase of more than 20 per cent for the National Institute of Standards and Technology (NIST) over three years has been authorised, and will continue the agency on a 10-year budget doubling trajectory for its core science and technology programmes. The measure also authorises raising the Department of Energy’s research and development programme funding by roughly 14 per cent over three years.

In addition, the reauthorisation boosts the cost of education allowance for NSF Graduate Research Fellowships from $10,500 to $12,000 annually, the first such increase in over a decade. It also removes a cap on NIST’s financial support of fellowships, previously limited to 1.5 per cent of its laboratory budget.

But the new law simply provides target authorisation levels for science agencies that must then be borne out in actual congressional appropriations that Obama can sign into law, and it has raised some concerns from within academic research circles.

’If the appropriations don’t equal what is authorised then essentially we are asking NSF and the other physical science agencies to do things that they can’t pay for,’ says Ben Corb, director of public affairs at the American Society for Biochemistry and Molecular Biology. ’It is kind of a toothless piece of legislation, without the dollars to back it up’. Although he says it is a ’good guideline,’ Corb calls the reauthorisation an ’unfunded mandate’.

Samuel Rankin, who chairs the Coalition for National Science Funding, also warns that if Congress fails to provide the appropriations laid out in the act, science agencies will have to reallocate funds in order to carry out the programmes authorised. He says that could adversely affect research grant funding.

’This doesn’t bode well,’ says Rankin, noting that reauthorisation numbers are historically high and are rarely matched by congressional appropriations. Given the current economic environment and the new Congress’ interest in cutting back spending, Rankin and others are not optimistic.