Scientists in the US have shown they can extend the lifespan of aluminium–air batteries by displacing corrosive electrolytes from their electrodes with oil when the battery is on standby. 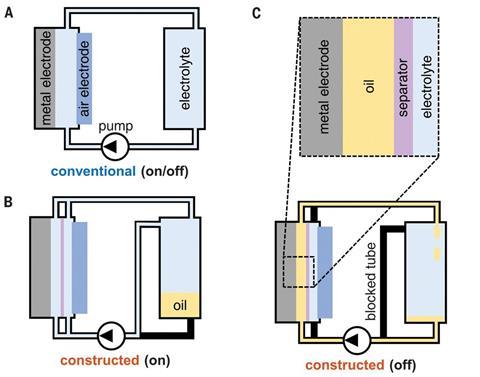 Scientists have redesigned the conventional  metal–air battery with a separator that displays underwater oleophobicity. Replacing the electrolyte with oil when in standby protects the electrodes from corrosion

After draining a battery, remaining electrolyte clings to the hydrophilic aluminium electrodes, causing corrosion and a dried crust of byproducts and electrolyte solutes. Now, scientists at Massachusetts Institute of Technology say they have solved the corrosion problem in aluminium–air batteries.

‘Store work tools in oil when they are not being used, they last longer. In the same way, we solved the corrosion problem by pumping oil into the battery when it was not being used,’ explains team member Brandon Hopkins, who is now at the US Naval Research Laboratory. ‘The oil pushes out the corrosive electrolyte from the surface of the aluminium electrode, which is what stores the energy in the battery.’

The researchers found a hydrophilic PTFE (polytetrafluorethylene) separator for between the battery electrodes that displays underwater oleophobicity, which means that when immersed in water it will repel oil. The aluminium also naturally exhibited underwater oleophobicity, though this was expected. Both surfaces simply like to be wetted more by electrolyte or water than they do by oil, Hopkins explains.

The researchers turned the new aluminium–air battery on for five minutes then left it to sit for a day or two. They then turned it back on again, and repeated the procedure until the battery ran flat. The conventional battery lasted three days, says Hopkins, because of corrosion, whereas the new design lasted 24 days. This equates to it being 420% more energy dense, though this depends on how you use the battery.

‘The aluminum–air battery is very high energy density, but having an aluminum electrode on standby and still immersed in electrolyte will consume the aluminum through corrosion reactions. Consequently, the high energy density is only available when the battery is being discharged continuously,’ comments Robert Savinell, a chemical engineer at Case Western Reserve University in the US. ‘The advancement here is that the electrode is coated by an oil, which protects the aluminum from corrosion when on standby, but the oil is reversibly removed when the battery is again used to provide energy by discharging.’

Potential applications are ‘where high energy density is needed, but with times of standby. Such applications include unmanned underwater vehicles, power for remote locations and temporary power for disasters,’ says Savinell. ‘Like all new technologies, long term performance needs to be demonstrated.’