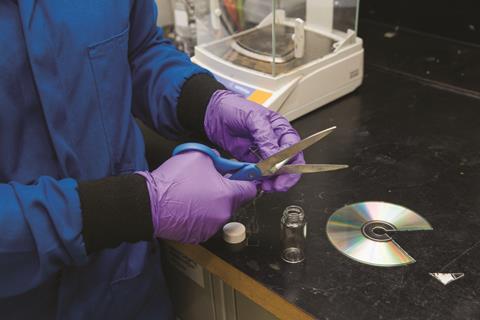 A new technique for recycling waste polycarbonate into a high-value polymer widely used in specialist engineering and medical applications has been discovered by researchers in California. The reaction uses a one-pot synthesis in which the polycarbonates are first depolymerised and then condensed to make poly (aryl ether sulfones) (PSUs).

Polycarbonates are impact-resistant, see-through polymers used to make a wide range of goods including CDs, safety glasses and aircraft canopies. However, an estimated 2.7 million tonnes are discarded every year as such products reach the end of their lives. Furthermore, large quantities of polycarbonate products were removed from the market over fears that these plastics were leaching bisphenol A (BPA) – an endocrine disruptor – from baby bottles and other food containers. ‘Basically, everything got pulled from store shelves and became waste overnight,’ says polymer chemist Jeanette García of IBM Research–Almaden in California. As polycarbonates are difficult to recycle, much of that waste ended up in landfill.

Now, García and colleagues unveil an unconventional alternative to binning waste polycarbonates where the waste polymers are converted to PSUs. Despite being melt-processable thermoplastics, PSUs have a high melting point around 180°C, making them popular for water purification membranes and medical equipment as they can be safely steam sterilised.

PSUs are normally produced by a condensation reaction between bisphenol A and a bisaryl fluoride in the presence of a carbonate catalyst. However, the researchers found that, when polycarbonates and an aryl fluoride are heated under these conditions, the same carbonates that catalyse the polycondensation reaction will first attack the polymer links, producing a metalated BPA intermediate that immediately condenses with the aryl fluoride to form PSUs. ‘We took a CD that was lying around in the lab, cut it into pieces and put it into the flask,’ says García. In principle, she says, the reaction should also work with newer BPA-free polycarbonates, although she cautions that ‘if there was a different [carbonate] monomer it would be incorporated into the final product, which could potentially influence its properties’.

‘For an initial disclosure of this approach, I think it’s phenomenal,’ says polymer chemist Nicholas Robertson of Northland College in Wisconsin, US. ‘A lot of times in chemical depolymerisations, you have to do the depolymerisation in one pot, then you have to purify it and then you have to repolymerise in a different pot,’ he says. ‘To be able to do all of that in one pot, and with inexpensive materials, is really exciting.’ He cautions that ‘a lot of times things fall apart when you go from the lab to the industrial scale’ but adds ‘the simplicity of this makes it more likely to succeed at scale.’