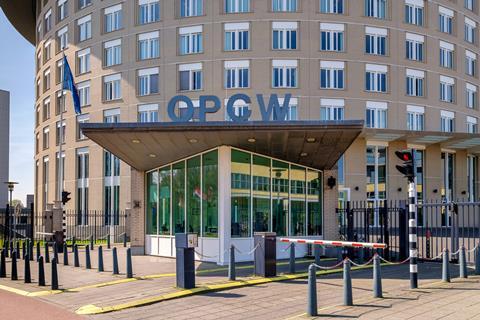 OPCW’s headquarters in The Hague, the Netherlands

The Organisation for the Prohibition of Chemical Weapons has given itself new powers to assign blame for the attacks it investigates.

Previously the OPCW was only allowed to conclude whether a chemical attack had taken place, and not point the finger at a specific group or country, regardless of the evidence it had collected.

In the most recent meeting of states in the Chemical Weapons Convention (CWC) – the international treaty that outlaws the use or stockpiling of chemical weapons – OPCW’s executive council voted 82 to 24 that investigators should ‘identify the perpetrators of the use of chemical weapons’ by including information on their potential origin in its reports. 30 countries supported the proposal, including the UK and the US.

OPCW’s director general Ahmet Üzümcü said the measure was necessary to preserve the CWC’s integrity. ‘Currently there is no mechanism that would ensure that those who use chemical weapons are held fully accountable,’ he said. ‘If accountability is avoided, the potential re-emergence and acceptance of chemicals as weapons of war and terror will not be deterred.’

The watchdog recently investigated chemical weapons attacks in Syria as well as the poisoning of former Russian Spy Sergei Skripal and his daughter with Novichok nerve agent in the UK city of Salisbury.