Opening the gate for molecular electronics

Chemists in Korea and the US have shown that the current running through a transistor made of a single molecule can be regulated by tweaking its molecular orbital energies. This observation brings molecular electronics closer to behaving like conventional silicon-based devices.

Takhee Lee from the Gwangju Institute of Science and Technology, South Korea, and Mark Reed from Yale University, US, used a battery of spectroscopic techniques to prove that their devices were true single molecule transistors. They also showed that an externally applied voltage was modulating the current by changing the molecular orbital energy levels of those molecules, and that different molecules behave differently depending on their orbital energy levels.

Field effect transistors (FETs) - the basis of computer chips - have three electrodes. The ’source’ and ’drain’ electrodes carry current through the device, while the ’gate’ electrode controls how much current can flow by applying a ’bias’ voltage, much like a volume controller. Lee explains that while single molecule versions of FETs have been made before, evidence of current control coming from direct electrostatic interaction of the gate electrode and the molecular orbitals has remained elusive. ’It’s difficult to make these devices,’ says Lee, ’and even more difficult to take the measurements,’ adding that it has taken nearly ten years of hard work to achieve these results. 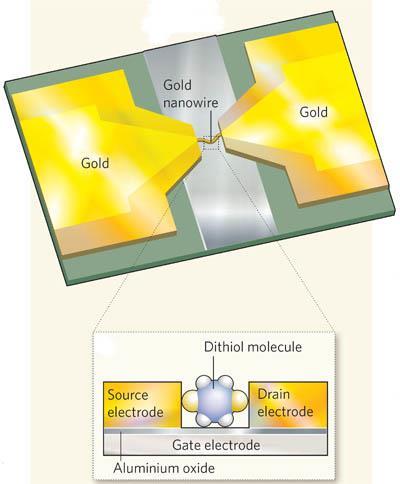 To make the transistors, the team needed to trap their subject molecules in tiny gaps between the source and drain electrodes. Lee explains that they used an established process called electromigration, where large currents are passed through gold nanowires, making tiny breaks as gold atoms move around. If the nanowires are coated with the molecules they want to test, then sometimes as a gap forms molecules will get trapped between the two ends. The whole assembly sits on an oxidised aluminium base which acts as the gate electrode.

To show that the applied gate voltage was really interacting with the molecular orbitals of the trapped molecule, the team used a technique called inelastic electron tunnelling (IET) spectroscopy. This reveals interactions of the current-carrying electrons with the vibrations of the molecule as they tunnel through it to pass between the source and drain electrodes. The team used two different molecules in their devices, both with thiol groups at either end to stick to the gold surfaces. Comparing FETs made from the saturated aliphatic1,8-octanedithiol with devices made from aromatic 1,4-benzenedithiol showed a significant difference - only the aromatic molecule showed differences in its IET spectrum with different gate voltages.

This means that, although both molecules make functioning FETs, their interactions with the gate voltage is very different. This is down to their orbital structure, says Mark Ratner from Northwestern University in Illinois, US. ’We know a lot about orbitals in isolated molecules,’ Ratner says, ’but inside a junction molecules are being beaten up by all these electrical fields, which is why it’s been so hard to make these measurements.’ He adds that what the team have shown is that knowledge of orbital structure can be applied to predicting how molecules will behave in these devices. ’It gives the community a hunting license to try these experiments on other molecules - and says that if you do it right, you will get what you think you should get, based on the molecular structure.’

While the measurements confirm what theoreticians had predicted, the prospect of functional electronics based on single molecules is still a long way off, says Lee. He points out that electromigration is currently uncontrollable and the yield of useful devices is quite small. ’We made 418 devices and only 35 of them worked properly,’ he says, ’it will take a breakthrough technique to get to a manufacturing level.’