Researchers in Canada have created organic light-emitting diodes (OLEDs) on flexible plastic substrates that retain the high efficiency of their non-flexible counterparts. The advance could help OLEDs make the leap into flexible displays. 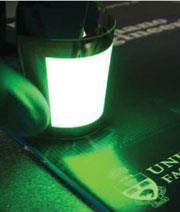 OLEDs have several advantages over their inorganic counterparts. Unlike normal LEDs, for instance, OLEDs do no not contain toxic heavy metals, such as arsenic, which have been banned in many jurisdictions. Another advantage is that OLEDs are amorphous: they can be made into a variety of different shapes and forms. The most promising are designs on flexible plastic, which can be used to make roll-up computer displays or light-emitting wallpaper.

However, the nature of OLEDs means a lot of light tends to get trapped in their structures, resulting in poor efficiencies of 20-30 per cent. The established way to avoid this problem is to fabricate the devices on substrates with a high refractive index, such as crystal glass, which can channel the light outwards and thereby improve efficiency. But glass isn’t flexible, so flexible OLEDs have had to stay largely in the poor-efficiency camp.

This is all set to change, according to Michael Helander of the University of Toronto. Helander, working with colleagues at Toronto and Queen’s University, Ontario, has come up with a way to keep OLEDs on flexible plastic while boosting efficiency. Instead of using an entire substrate of high-index material to channel light outwards, the researchers insert a very thin layer on top of the substrate, beneath the OLED. This high-index layer - tantalum pentoxide (Ta2O5), just 50-100nm thick - appears to have the same effect as making the entire substrate high-index, and demonstrates an efficiency (for green light) of 63 per cent.

Michele Muccini, an expert in OLEDs at the Bologna Research Area of the Italian National Research Council, says the development by Helander and colleagues has ’great value’ for the field of organic optoelectronics. However, he adds that low-cost mass production remains a challenge, because of the logistics and cost of processing Ta2O5 by sputtering. ’Finding alternatives to these materials and processing will be part of the next steps of the development strategy,’ he says.

Helander admits that it will be at least three to five years before this technology appears on the market. ’The next step is scaling up the process and techniques we have demonstrated for small, lab-scale prototypes (several square centimetres) to full industrial mass production size (several square metres),’ he says.