Overlooked hydrogen bond at the heart of protein structure 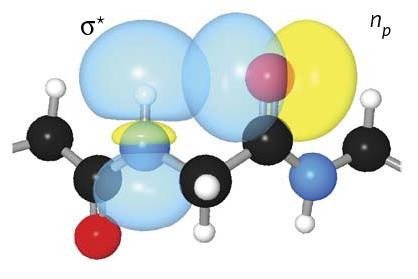 A hydrogen bond missed for decades appears to play a major role in stabilising proteins’ secondary structures – especially β-sheets. Despite its weakness, this bond is common enough to have a cumulative impact on the stability of the typical protein, particularly those related to neurodegenerative disorders like Alzheimer’s disease. Understanding these interactions is key to developing reliable computational methods that model 3D protein structures from their sequence.

‘People have been looking at the structure of the protein backbone for decades, […] but we still don’t appreciate all the chemical interactions occurring within them,’ says Robert Newberry, researcher at the University of Wisconsin–Madison in the US and co-author of this paper. ‘We had identified a second interaction in the backbone of the α-helix that seems to complement the canonical hydrogen bond that was known for decades, but were not aware of similar interactions in β-sheets. This inspired our work, especially because these secondary structures are implicated in protein misfolding diseases [like Alzheimer’s].’ 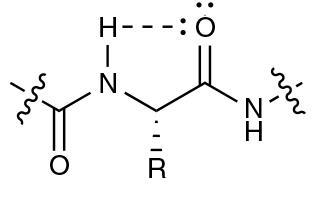 The hydrogen bond in question forms between the amide proton and the carbonyl oxygen of the same amino acid. The US team examined the hydrogen bond, dubbed C5, using a myriad of both computational and experimental techniques. One means of investigating the bond involved creating engineered modified peptides that would form weaker hydrogen bonds. The researchers found that these new peptides were more unstable, showing denaturation temperatures up to 25°C lower than naturally occurring structures. According to Newberry, this interaction may have been overlooked because ‘it fails some of the criteria of classic hydrogen bonds: it’s not linear, thus most computer programs don’t recognise it’. However, using computational calculations, ‘you can actually look at the molecular orbitals and see this C5 bond is really possible’, adds Newberry.

Gail Bartlett, a bioinformatics researcher at the University of Bristol, UK, thinks that ‘proteins are very complex systems, and the understanding of the interplay between all these non-covalent interactions is still far from complete. Nevertheless, I believe this new work is quite significant, and will lead to improved force fields and scoring functions for predictive models.’ Bartlett points out that ‘this is the first time the C5 interaction has been studied in a protein context, in solution’.

New computational methods will allow researchers to better predict the structure of proteins that can be sequenced, but can’t be isolated or crystallised. ‘Including interactions like the C5 hydrogen bond in computational calculations will improve researchers’ ability to design new models and, eventually, new drugs to fight neurodegenerative diseases,’ concludes Newberry.