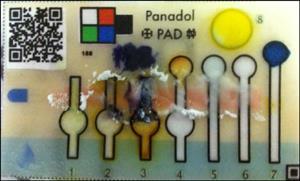 A paper based testing kit that can spot counterfeit drugs is being developed by US researchers. The test uses a set of simple colour-changing tests on a credit-card sized paper sheet to detect fake Panadol (paracetamol) tablets and kits are being developed to detect fake antimalarials, antibiotics and other drugs. The cheap and simple devices could be used in developing countries, where price pressures and poor regulation combine to make counterfeit drugs a major problem.

‘We focused on Panadol first because it’s one of the most counterfeited branded drugs in the world, but also because it is put into other counterfeit drugs such as antimalarials to make them have a perceived beneficial effect,’ says Toni Barstis, who led a team of undergraduate researchers at St Mary’s College in Notre Dame, Indiana, working with collaborators at the University of Notre Dame.

Speaking at the American Chemical Society national meeting in Philadelphia, Barstis explains that the card (called a paper analytical device, or Pad) has several paper ‘tracks’ impregnated with chemicals to test both for the genuine active ingredient and other pill components and the most likely substitutes. For example, one track can distinguish between different types of phenol groups to tell paracetamol and aspirin apart, while another contains iodine to detect the starch used as a binder in genuine Panadol.

The procedure for testing a tablet is very simple, says Diana Vega Pantoja, one of the students on the project. The tablet is crushed and a small amount spread across the tracks of the Pad. The bottom edge of the Pad is submerged in water and soaks up by capillary action to bring the test chemicals into contact with the sample. ‘The final track is a timing track to indicate when the water has soaked far enough up the Pad. This gives a qualitative screen of what’s in the tablet,’ she says.

The remainder of the crushed tablet is dissolved in a few millilitres of ethanol and a couple of drops added to a second area of the Pad. ‘This can give us a semi-quantitative idea of how much of the active ingredient is in the tablet, to see if it’s the correct amount, under-dosed, or doesn’t have any [paracetamol] in at all,’ says Vega Pantoja. However, the tests can only provide so much information. ‘It gives pieces of a puzzle that can raise suspicion about a tablet’s origin, rather than give a complete analysis,’ Barstis adds.

The team has conducted field trials of the Pads, involving local schoolchildren and volunteers. ‘We’ve done over 600 tests, with people aged from 11 into their 90s,’ says Barstis. ‘That was a real eye-opener. We found that people’s perception of colours varies massively, so we made some changes to the chemistry and started to develop a computer program to interpret the results, using pictures taken on mobile phones.’

‘The biggest advantage of this method is cost, and the fact that it requires a very low amount of technical expertise,’ says Facundo Fernandez from the Georgia Institute of Technology in Atlanta, US, who develops mass spectrometric methods to detect counterfeit drugs. He adds that in any multi-layer testing system, you want a cheap and easy first screen, which can be followed up with more sophisticated techniques. ‘Their plan to extend it to other drugs is something I’d really like to see in the future as well. It’s very exciting.’

The team has set up a collaboration with pharmacists in Kenya, to get valuable feedback about how the Pads perform in the field. However, Barstis acknowledges that they will need some kind of partner to develop a way of mass producing the Pads to get under their target of 10-25 cents each. Currently, production of the Pads is still quite low-tech. ‘I had my kids involved making them for the field trials,’ she says.