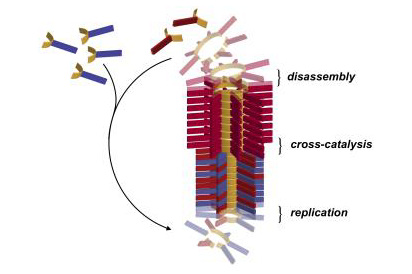 A six-ring replicator grows off a pre-existing eight-ring replicator, only to consume the eight-rings and use its components for its own replication, resembling parasitic and predatory behaviour

Dutch researchers have seen parasitic behaviour that’s usually associated with life emerge in a system of non-biological self-replicating molecules for the first time. The finding offers clues to how life evolved as well as how synthetic life could be made out of simple self-replicating chemical building blocks.

Life and its evolution depends on a highly complex and dynamic interplay between different organisms. But most systems that have been developed to explore life’s origins or to create synthetic life have featured just a single, isolated reproducing molecule, based on DNA, RNA, peptides or synthetic replicators.

Now, Sijbren Otto and colleagues at the University of Groningen in the Netherlands have studied a system that involves one kind of self-replicating molecule helping the formation of another type of replicator, which then, like a parasite, consumes the resources of the initial replicator in order to survive and thrive.

‘It is very exciting to discover parallels between completely synthetic chemical replicators and rather advanced dynamics seen in current life,’ says Otto. ‘Our work shows that a phenomenon such as parasitism, that is well established in current life, can already occur even before the emergence of life. This also means that strategies to deal with parasitism had to be developed early on.’

The team made the discovery while working with synthetic replicators – previously developed in Otto’s lab – based on dithiol building blocks that form rings which then stack on top of each other to create fibres. When the flask is stirred, the fibres break in two but these continue to grow with more rings, and then these break in two, enabling exponential replication.

Previous experiments revealed that pre-existing replicators could assist the formation of new replicators in the same flask, which then co-existed and co-operated in each other’s formation. This time, the team set out to see if replicators could ‘evolve’ if they were fed with building blocks that were increasingly different in structure. Instead, the researchers were surprised to observe parasitic behaviour.

‘I’m not surprised by this result because computer simulations have predicted such parasitic behaviour, but having experimental verification is brilliant because it sets a foundation for an even more exciting series of experiments,’ comments Lee Cronin who explores synthetic life at the University of Glasgow, UK. ‘The next step would be how the system could self-generate cell walls to confine replicators, as in biology.’

Otto says that they are now developing systems towards Darwinian evolution and that they have already shown that it is possible to cover all the bases of Darwinian evolution: replication, mutation and selection. ‘Now the challenge is for the system to start making inventions in which evolution should become open-ended,’ he explains. Indeed, he says they have already developed a system in which replicators have invented the ability to catalyse reactions other than their own replication.