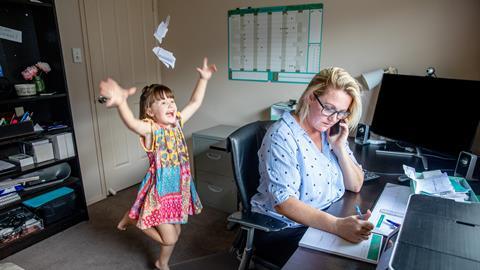 New light has been shed on the dilemma many female academics face: motherhood or an academic career. US researchers have found that mothers who are academics are significantly more likely than fathers to report that having to care for children has hurt their careers. On the other hand, they found that female academics are less likely than their male colleagues to have children and more likely to have fewer children.

Using data from a survey of almost 8000 academics in North America and publication data from the Web of Science, the team analysed how parenthood affected academic achievement, both objectively, such as citations and collaborations, and subjectively, such as self-reported research satisfaction and perceived recognition. The sample contained 57% women, 43% men and 0.4% non-binary.

The team found that among those without children, women (60%) are more likely than men (43%) to report that career considerations played a role in whether they became a parent. The researchers also found that academic parents are less productive at work and more dissatisfied than those without children. The study also found that mothers who are academics spend more time on childcare and household tasks, and experience more research pressure and job stress, than men. They are also less likely to receive help – in terms of time and emotional support – from partners. The result is often fewer opportunities for networking and academic collaboration, and lower research productivity.

Allison Morgan, University of Colorado, US

Lead researcher Chaoqun Ni at the University of Wisconsin-Madison, says that current policies and regulations, which provide short-term support for parents such as parental leave, are insufficient to bridge the gender gap in academia. ‘Governments and institutions should consider ways to provide parents with support that goes beyond this period. Other forms of sustainable family-friendly support, such as affordable childcare, onsite childcare, flexible working schedules and supportive working environments are available options.’

She points out that, given the observed productivity gap, current metric-based evaluations may systematically disadvantage mothers. ‘When using such metrics in making decisions on hiring, tenure and promotion, institutions should make it a high priority to consider parenthood and individual conditions.’

‘This paper nicely highlights how much of the observed gender gaps in not only productivity, but also career satisfaction, are driven by differences among parents,’ says Allison Morgan, a graduate student in computer science at the University of Colorado, Boulder, who is investigating social inequality within faculty networks. ‘The authors also find that mothers receive less support from their partners, and this lack of support likely hinders their career advancement. Women in academia are more likely to partner with other academics. [So] their institutions have a large role to play in promoting policies and norms that encourage fathers to partner more equitably in caregiving.’

Stephen Curry, assistant provost for equality, diversity and inclusion at Imperial College, London, says it’s been clear for some time that the practical and cultural burden of parenthood weighs particularly on women. ‘It is interesting that the study finds that the gender gap can be attributed exclusively to the impact of parenthood on women, but I would like to see similar studies in countries where there are higher levels of support for maternity (and paternity) leave.’

In terms of interventions, he highlights legislation in some Scandinavian countries where couples lose entitlement to parental leave if the father doesn’t take a significant portion of the shared leave. ‘We also need good financial support for childcare at a national level – something that is not happening in the UK. Institutions can play a part too with family-friendly policies, such as providing nurseries and, as at Imperial, offering fellowships that allow parents who have taken a significant amount of maternity or paternity leave to focus on their research in the year following a return to work.’