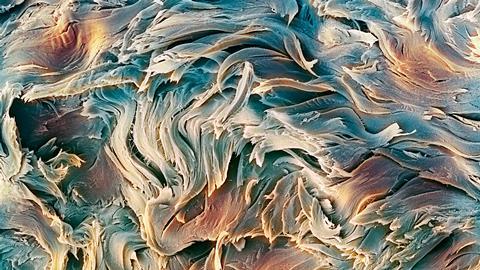 Supramolecular assemblies of simple tripeptides accelerate an asymmetric reaction, researchers have discovered. ‘These [tripeptides] self-assemble into fibrils, supramolecular structures that… speed up a Michael reaction,’ explains Armando Carlone, from University of L’Aquila, Italy, who led the study.

Carlone’s group started studying organocatalysis a few years ago. ‘We were inspired by molecular machines and supramolecular structures, in particular self-assembling peptides,’ he says. These formations keep the activity of traditional organocatalysts, like proline, but exhibit higher activity thanks to the ordered architecture . ‘Although tiny, fibrils mimic the activity of natural enzymes, creating a lipophilic pocket that repels water and boosts interactions among the reagents,’ adds Carlone.

Carlone and his team collaborated with experts in self-assembling peptides to design the perfect structure, which comprises one proline and two phenylalanine units. ‘These trimers often aggregate, enabling the formation of fibrils in a variety of solvents,’ explains Carlone. ‘We just chose proline as part of the [sequence] to convey organocatalytic properties.’

When the tripeptide (right) self-assembles into supramolecular fibrils it speeds up this Michael addition by up to 74% compared with the non-assembled, molecular catalyst

In pure water, the tripeptides show only little activity catalysing a Michael addition of aldehydes to nitroalkenes – a benchmark reaction in organocatalysis. But when the supramolecular structures form in a phosphate buffer solution, the reaction speeds up by up to 74% . However, the fibrils don’t influence the reaction’s enantioselectivity.

‘This is very solid work that expands our capabilities in organocatalysis,’ says Kate Adamala, an expert in biocatalysis at the University of Minnesota, US. ‘The reaction runs well in aqueous media and tolerates a broad range of substrates, both key milestones to reduce our reliance on oil-based reagents and meet green chemistry targets.’

Raquel Herrera, an expert in asymmetric organocatalysis at the Institute for Chemical Synthesis and Homogeneous Catalysis in Zaragoza, Spain, sees promise in this concept. ‘Many other benchmark reactions use proline derivatives, and could consider testing these interesting conditions,’ she says. She also hopes later works will analyse whether modifying in the tripeptide structure could lead to better yields and enantioselectivities.

Adamala agrees, and looks forward to further high-throughput screenings to enhance the performance of these catalysts. Moreover, ‘the technology could find uses in industry,’ she says. The tripeptides react with different substrates – a Swiss Army knife for many reactions.

‘This is indeed a first proof of concept,’ says Carlone. ‘Soon, we hope to carry out computational calculations to better understand the mechanism and rationalise the peptide design.’ One of his team’s goals is to develop similar catalysts that induce enantioselectivity by forming non-covalent interactions, like hydrogen bonds. Such interactions are quicker than the covalent ones the fibrils rely on, which ‘will enable even faster reactions’, says Carlone.

Correction: A link to a study was added on 4 October.