Perfluorinated chemicals (PFCs), which are used ubiquitously in common items like food packaging, pesticides, clothing and upholstery, have for the first time been linked with female infertility. The finding came just days after the US Environmental Protection Agency (EPA), under former President Bush, issued an advisory for PFC exposure that some criticised as too lax.

Published by investigators at the University of California, Los Angeles (UCLA) on 28 January, the research revealed that women with higher levels of perfluorooctanoate (PFOA) and perfluorooctane sulfonate (PFOS) in their blood took longer to become pregnant than their counterparts with lower levels. They were also twice as likely to be diagnosed with infertility. 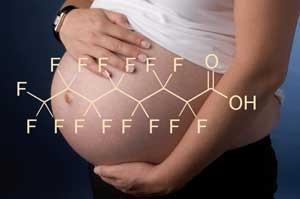 Perfluorooctanoate has been linked with female infertility

The UCLA researchers analysed data from over 1,200 women included in the well-known Danish National Birth Cohort, a longitudinal study launched in 1996. Although very few studies have been done on the health affects of PFCs in humans, earlier research has indicated that PFOA may impair the growth of babies in utero.The UCLA team postulates that sperm quality could also be affected by PFCs, because these chemicals are thought to interfere with the hormones involved in reproduction.

Despite the dramatic results, Olsen says his research is too preliminary to inform the policies of EPA, or any other government agencies. ’This is the first study of its kind, and it really needs to be replicated before we can make any firm conclusion about whether these compounds really do affect fertility,’ he tells Chemistry World.  ’We need to see if these findings can be replicated in an independent data source.’

On 15 January, EPA issued an advisory recommending thatpeople not consume water containing more than 0.4 parts per billion of PFOA. This standard is criticised by some as too weak, in light of the fact that PFOAhas been linked to cancer, liver damage, birth defects, and now infertility.

But Dupont, one of several global manufacturers that make and use PFOA, supports the EPA advisory. ’It is consistent with almost all regulatory guidelines already established by several EPA regions, states, and other European countries,’ states company spokesperson Bob Nelson.

Nevertheless, Dupont has pledged to significantly reduce manufacturing emissions and product content levels of PFOA, its precursors and related higher homologues by 2010. The company, which also wants to eliminate those sources by 2015, says its plans are unchanged by the new UCLA findings.

The fact remains, however, that the new Obama administration could raise the stakes. The newly appointed EPA administrator, Lisa Jackson, has differences with her predecessor, Stephen Johnson.

In 2007, when she was the commissioner of New Jersey’s Department of Environmental Protection, Jackson set  an advisory level for PFOA in drinking water of 0.04 parts per billion in that state - 10 times stricter than the new EPA advisory. Her action came after PFOA was found at elevated levels in the public drinking water near DuPont’s Chambers Works chemical plant in New Jersey.

Obama has put a hold on many of Bush’s last minute regulatory actions, and opponents of PFCs are hopeful that the latest EPA advisory will be reversed.