Pheromone trap will not let the bed bugs bite

Bed bugs are attracted to chemicals in their own faeces, which could make infestations easier to spot 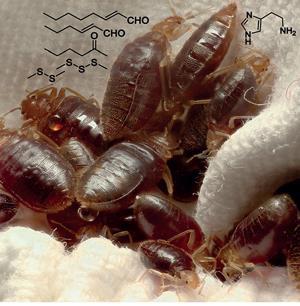 A cocktail of pheromones from bed bug faeces can be used as a chemical lure to catch them, making it easier to deal with infestations, say scientists in Canada. The work suggests a synthetic pheromone blend may be a cheap alternative to the methods currently used to detect bed bugs in houses.

Bed bugs appear to be a growing problem in the US, with the expansion of the online used furnishings market and cheap commercial travel allowing colonies to cross the country quickly. A recent report highlighted the urgency in dealing with this problem, as bed bugs may facilitate the spread of dangerous parasites, such as those that cause Chagas disease.

‘This is really an epidemic now,’ says Rob Britton, from Simon Fraser University, Canada, one of the researchers involved. ‘The number of bed bug bites, just in the US, that have been reported in emergency rooms went from 21 in the year 2000 to somewhere near 15,000 by 2010.’

The problem with early bed bug detection is that it is very expensive for homeowners, often requiring a sniffer dog to seek out a colony. Britton and his colleagues decided to look for cheaper alternatives. ‘[We started] looking for chemicals the bed bugs made to see if we could attract them,’ explains Britton. ‘What we came across … was that the shed cuticle of the bed bug is attractive.’

By examining over 18,000 shed bed bug shells, along with their faeces, the team found the bugs were attracted to the waste and stayed in the area where these samples were placed.

Using NMR spectroscopy, they identified the six chemicals that make up the attractive blend, including three components that had not been previously detected; dimethyl disulfide, 2-hexanone and histamine, a low-volatility compound.

To put their chemical lure to the test, the team synthesised the pheromone mixture, placed it on corrugated cardboard and laid the ‘traps’ within an infested residential flat. They compared their trap to a non-baited piece of cardboard. All of the bed bugs previously identified in the flat congregated around the pheromone stain. The researchers also noted it did not matter if the bugs were male or female, adult or nymph, fed or unfed, they all were attracted to the trap.

Britton argues that the pheromone mix, if employed in residential areas, may cost as little as 10 cents (£0.07) per trap, as the chemicals are easily obtainable and cheap to synthesise.

Ole Kilpinen, from the Danish Pest Infestation Laboratory, Denmark, believes the research is a promising development. ‘It’s a good first approach,’ he tells Chemistry World. ‘The next big step is that they have to show [the range over which] this works.’