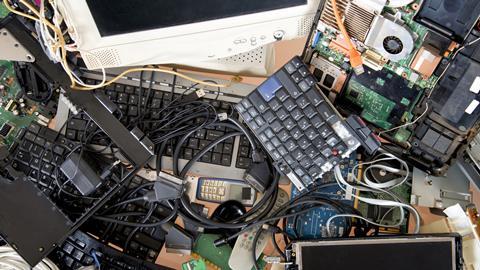 Researchers in China and the US have developed a simple photocatalytic process for selectively retrieving precious metals from waste electronics and catalysts. The process could also potentially reduce the environmental footprint of gold mining.

The ubiquity and sophistication of electronic goods has created a growing demand for the precious metals they contain such as gold, platinum and iridium. It has also created a growing problem of electronic waste – in a recent Ipsos Mori poll, commissioned by the Royal Society of Chemistry, 45% of respondents reported having at least five unwanted electronic devices in their homes. This could lead to shortages of these raw materials if they are not recovered from devices at the end of their life.

However, retrieving precious metals from waste electronics is difficult for one of the same reasons the materials are so valued: they are generally unreactive. Current recylcing methods therefore involve strongly corrosive and toxic reagents such as dissolving in aqua regia, and proposed alternatives are usually complex and difficult to scale up.

Extracting such chemically noble metals can also create environmental hazards. In gold’s case, it has to be oxidised and subsequently reduced to purify it. ‘Classically gold extraction is done using cyanide,’ explains inorganic chemist Jason Love of the University of Edinburgh; ‘Air is your oxidant, and you form a complex called dicyanoaurate … that’s used for 90% of gold extraction.’ Owing to the environmental risks of cyanide discharge, several countries and US states have banned cyanide mining and others are attempting to phase it out.

Now, Zhenfeng Bian of Shanghai Normal University and colleagues in China and the US have developed a simple method of sequentially leaching multiple precious metals using photocatalysis. The process uses TiO2 in acetonitrile solvent in the presence of oxygen. Irradiating the solution with UV light photoexcites the TiO2, forming electron hole pairs that go on to produce superoxide and cyanomethyl radicals from the oxygen and solvent respectively. These radicals then oxidise the metal atoms and the metal ions are dissolved into solution.

In their experiments, the researchers soaked computer processing units in the mixture and found that after 8 hours all the copper had leached into the solution, leaving everything else intact. Under continued irradiation, the silver and then finally the gold leached out. The researchers found that adding dichloromethane at this point then allowed them to extract any platinum. Using a similar approach, the researchers removed rhodium, palladium and platinum from a sample of automotive catalytic converter and the gold from gold ore.

‘It’s a really neat trick, actually, and one that I’d not seen before,’ says Love, who was not involved in the research: ‘Previously I’d seen photoreduction, where people had taken a metal in solution, done photolysis and reduced it to its metallic state. They’ve turned it around.’ He is cautious about some details, however: ‘They put in a massive amount of titanium dioxide: the quantum efficiency [how efficiently they use photons] is very, very low.’ He is also surprised by the demonstration of sequential dissolution: ‘I would have thought that if you generate organic radicals in solution they’re gonna react with anything and everything.’

Bian’s team is already working on improving the process by first looking at the solvent. ‘Acetonitrile is a solution used widely in the laboratory and in companies,’ says Bian, ‘It’s like alcohol: the toxicity is very low.’ However, the researchers believe it should be possible to conduct the reaction in water. ‘We should design some group from the acetonitrile on the photocatalyst,’ explains Bian. ‘We already have some preliminary results.’