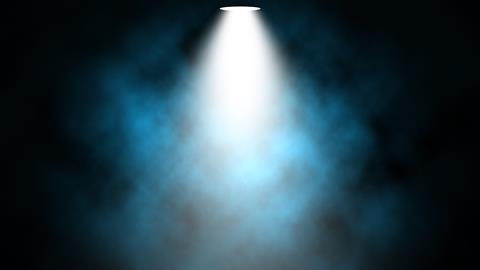 A new metal-free strategy offers a site-selective and general way to functionalise arenes. This photochemical method works on starting materials that feature many other functional groups, meaning it can be used for the late-stage modification of complex compounds like pharmaceuticals and agrochemicals.

Researchers from the University of Manchester, UK, developed a donor–acceptor complex that generates aryl radicals, enabling new substituents to subsequently be installed on the aromatic ring. Aryl radicals are highly unstable and so making them and controlling their reactivity has previously presented a huge challenge. Until now, synthetic chemists were limited to making radicals from aromatic compounds with electron withdrawing substituents.

The team overcame this hurdle using donor–acceptor complexes that feature an electron-rich amine, and electron-accepting sulfonium salt species. Thanks to these complementary properties, the generation of radicals is independent of the electronic features of the aromatic precursor. ‘The key advantage of donor–acceptor complexes in photochemistry is generating radicals without external photocatalysts, which normally rely on precious metals like iridium,’ says Giacomo Crisenza, one of the researchers involved in the project. ‘We also take advantage of the electron-deficient nature of the aromatic rings in the sulfonium salts, instead of the aromatic systems [in the target molecules],’ he adds. ‘This opens the door to the functionalisation of many different aromatic systems, regardless of their structure and substitution.’

While colourless as separate species, sulfonium salts and amines together form colourful coordinated complexes that capture visible light instead of the usual highly energetic ultraviolet wavelengths. ‘This feature facilitates the selective excitation of the donor–acceptor complex, thus fostering the formation of the aryl radicals,’ adds Crisenza. As visible light is a more gentle energy source, it improves selectivity and compatibility with otherwise competing functional groups. 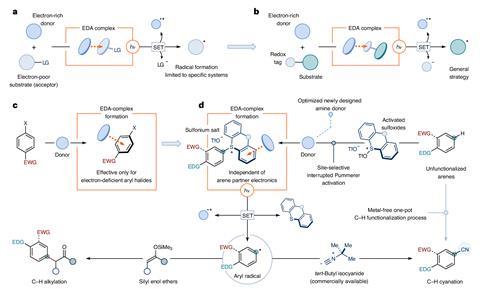 ‘It’s interesting [the reaction] allows the formation of aryl radicals with diverse electronics, otherwise elusive,’ says Ana Bahamonde, an expert in asymmetric catalysis and photochemistry at the University of California, Riverside, in the US. ‘It’s complicated to generate [these radicals] under mild conditions, from readily available starting materials,’ she says. ‘Furthermore, it’s difficult to control their reactivity towards the desired product formation.’ Another advantage is ‘this methodology tolerates aromatic halogens and other functional groups that are not compatible with organometallic catalysts’, she adds.

The strategy offers an attractive alternative for late-stage functionalisation of drugs and agrochemicals. ‘This is the biggest difference [with] current alternatives, [since] the one-pot installation of the sulfonium salt via C–H functionalisation facilitates [these] processes,’ says Bahamonde.

‘Our reaction works with complex scaffolds, with moieties that usually would react with the radicals and transition metal catalysts,’ says Crisenza. ‘But the donor–acceptor system focuses the reactivity in one spot and avoids unwanted side processes,’ he adds. As a proof of concept, the team derivatised pharmaceuticals such as the anti-inflammatory naproxen and the fungicide boscalid.

The researchers demonstrated the potential of the sulfonium salt system to facilitate both the alkylation and cyanation of arenes. While other metal-free photocatalysts for cyanation had already been reported, the method bypasses the need for highly toxic cyanide reagents. Instead, it uses commercially available cyanide surrogates that form the reactive species in situ and immediately trap the aryl radical, thus avoiding the generation of poisonous products.

‘The provision of precious metals, such as iridium, is a ticking clock,’ comments Crisenza, referring to the scarcity of this common catalyst in photochemical processes and aromatic C–H funtionalisation reactions. ‘We’ve expanded the synthetic toolbox with a metal-free alternative that’s fast, cheap and more sustainable,’ he adds.