A new high-throughput screening system based on photonic crystals could quickly and cheaply detect molecules that disrupt binding between proteins and DNA, offering a new way to look for novel classes of drugs, say scientists in the US.

Paul Hergenrother and Brian Cunningham at the University of Illinois at Urbana-Champaign say their device could screen 22,000 small molecules a day that might disrupt protein-DNA interactions - and the technique is also applicable to studying protein-protein or protein-RNA interactions. The authors presented their research on 1 August at an RSC conference, Transatlantic frontiers of chemistry, in Cheshire, UK. 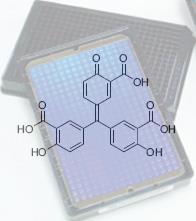 The photonic crystal biosensor, under the structure of aurin tricarboxylic acid, picked out as the first known small molecule inhibitor of binding between DNA and AIF (apoptosis inducing factor)

Many traditional drugs inhibit enzymes, and various high-throughput methods have been adopted in this field to identify small molecules that might make drug leads. Fluorescent markers, for example, can reveal whether an enzyme’s chemical activity has been blocked by a drug candidate.

Disrupting protein-protein and protein-DNA interactions is an alternative mode of action for drugs, but the area is largely unexplored, says Hergenrother, partly due to a lack of good high-throughput screens.

The team used photonic crystals as the basis for their screen - an approach recently developed by Cunningham. These crystals consist of dielectric materials arranged in periodic patterns, which concentrate and reflect light that’s shone through them, to specific points. DNA strands attached at these points affect the peak wavelength of reflected light. This wavelength shift directly depends on the density of molecules absorbed - so reveals whether DNA-protein binding has taken place.

To prove their technique could find ’hits’, the researchers looked for inhibitors that stop DNA interacting with apoptosis inducing factor (AIF): a protein released by damaged cells that binds non-specifically to chromosomal DNA and causes the cell to die. AIF mis-regulation has been implicated in several diseases, including Parkinson’s and Huntingdon’s.

The team had tried to identify inhibitors using fluorescence polarisation (FP), an existing fluorescent tag-based approach which is meant to spot whether molecules (such as AIF) bind to DNA by detecting a change in the polarisation of light emitted upon binding. But adding AIF to DNA didn’t change the polarisation, so the researchers developed the photonic crystal approach instead.

The researchers used their high-throughput device, along with a clear 384-well plate, to screen a library of approximately 1000 compounds for their ability to block AIF-DNA binding. The screen revealed one compound, aurin tricarboxylic acid (ATA), that inhibited binding - the first known AIF small molecule inhibitor.

Although ATA binds fairly weakly, so would be an unlikely drug lead, the ’hit’ shows that the technique works, says Hergenrother.

’There’s a real need to develop effective ways to screen compounds that inhibit DNA-protein interactions,’ says Helen Blackwell, who studies bacteria interactions at the University of Wisconsin-Madison, US. ’The current methods work in certain cases but aren’t general - this method looks straightforward, gives reproducible data, and looks like it wouldn’t be too expensive,’ she adds.