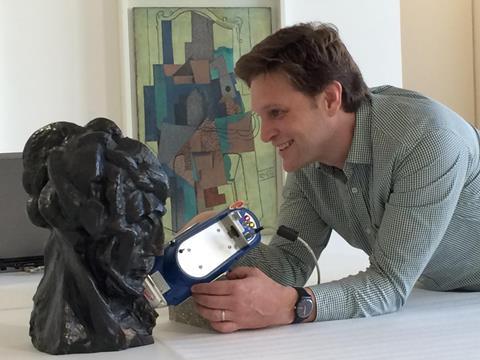 Researchers from Northwestern University in Massachusetts and the Musée national Picasso in Paris have traced five of Pablo Picasso’s sculptures to a second world war foundry in Paris. They revealed their findings at the American Association for the Advancement of Science (AAAS) meeting in Austin, Texas on 17 February.

The international team of scientists, art conservators and museum curators used portable instruments and a comprehensive database of alloy ‘fingerprints’ to analyse 39 of Picasso’s bronze pieces that were cast between 1905 and 1959. The group was able to determine that five of the metal sculptures underwent casting in Paris during the second world war at the foundry of Émile Robecchi, a relatively obscure metalworker who was active in Paris in the 1940s. The researchers made the discovery with portable x-ray fluorescent spectrometry and a database of the composition of bronze art created in the late 19th and early 20th centuries.

One of the pieces the team investigated was Picasso’s Head of a woman, in profile, which was cast without an identifying foundry mark. ‘Through our research, we were able to assign this specific foundry to this sculpture, which was an orphan in terms of where and when it was cast,’ said Francesca Casadio, one of the project’s leaders and director of conservation and science at the Art Institute of Chicago.

X-ray fluorescence allowed the researchers to collect data from multiple points on the sculpture in a non-destructive way. By contrast, alternative techniques used to collect such information can be destructive, and only allow researchers to procure one sample from one point. ‘We take, on average, about 10 or 12 measurements and this gives the elemental composition in a qualitative way,’ Casadio explained. ‘Then you calibrate your values against these reference standards and you can quantify those major elements.’

The discovery that the Picasso sculptures came from the Robecchi foundry is particularly interesting from a historical point of view, given that by 1941 the German government was seizing metals from sources like faucets and handrails for the war effort. That begs the question of how Picasso managed to cast some of these large works in the early 1940s.

Most established foundries in Germany closed in the 1940s, but some rogue foundries continued operating in secret. They were in remote areas and used metal that their owners had hidden from the Germans. ‘It was real money that they could make,’ Casadio said. She noted that Picasso wanted these bronzes casts at that time because he feared that the plasters he’d been working with were too fragile and prone to damage.

However, presenters at the AAAS conference made it clear that chemistry’s application in the artistic realm goes beyond enhancing art history. In another session, moderator Eric Breitung criticised US government support in this area. ‘The amount of federal funding that goes into science in this field is abysmal,’ stated Breitung, a research scientist at the Metropolitan Museum of Art in New York City. By contrast, he said, government support for science in this field is going up in Europe. ‘In Europe, they actually fund many university labs to then have one foot in a conservation lab or a museum, and then the other foot is in the university,’ Breitung said. ‘They can actually fund their lab with this money.’ Europe’s Horizon 2020 programme is providing over €100 million (£88 million) for cultural heritage projects.

In the US, funding for cultural heritage science projects mostly comes from private donors such as Disney, Breitung said. ‘This is unfortunate,’ he adds. ‘Are we letting just the deep pockets choose which avenues of research we take, and what artwork we are conserving or trying to figure out how to preserve?’