UK researchers have found a new way to piece together pi-functional molecular building blocks to make a wide range of macromolecules, using direct activation of C-H bonds to join units together on a copper surface.

The team, led by Rasmita Raval of the University of Liverpool and David Amabilino, now at the University of Nottingham, explains that the ubiquitous presence of C-H bonds in molecular building blocks allows readily available units to be picked and mixed on the surface and then heated to link the building blocks into an array of different macromolecular structures. The resulting products can then be investigated to identify optimum structures for specific functions, potentially opening up new approaches to the development of molecular electronics devices, biomedical and environmental sensors, energy harnessing systems and novel catalysts.

Although hetero-coupling of pre-functionalised molecules on a surface has recently been used to build two-component products, the team’s novel ‘pick-mix-link’ approach makes it possible to build a diverse range of complex entities with multiple components. 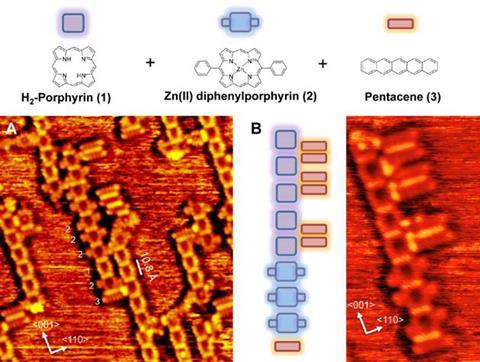 The strategy has several advantages over earlier attempts at bottom-up construction of molecular-scale devices, the researchers say. Specifically, their method emulates the approach to synthetic biology in which strands of DNA or peptide building blocks might be assembled in all possible combinations and the useful products plucked from the milieu for further analysis and investigation.

The team used their approach to link together pentacenes, perylenes and porphyrin units to create block copolymers, branched ladders, rod coil structures and various other structures identified by scanning tunnelling microscopy. These molecules have all been used successfully in 3D organic semiconductor materials, with oligomers synthesized for molecular nanowires and light-harvesting functions. The team’s new coupling strategy provides a direct route to introduce such macromolecular functionality on a surface.

‘The work is beautiful and reaches an incredible accuracy at the molecular level, far better than my set of Lego as a kid,’ Jean Weiss from CNRS-Université de Strasbourg, France, tells Chemistry World. ‘The contribution is important because surfaces initially used only for the visualization of nanostructures are now emerging as tools for organization and construction in this work.’ He points out that the next step will be direct assembling and tuning of molecular devices between sets of contacts. ‘This is very close, but for this, the methodology needs to be implemented on dielectric surfaces,’ he says.