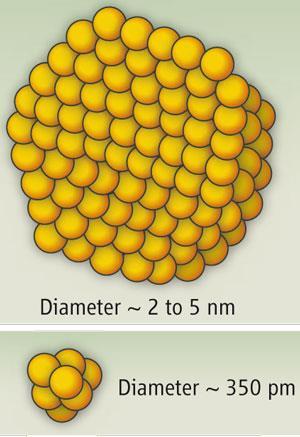 Chemists in Spain have shown that small clusters of gold atoms are excellent inorganic catalysts with record-breaking efficiency. The clusters, which have been used in the hydration of alkynes, exhibit catalytic turnover frequencies of up to 100,000 per hour at room temperature.

Interest in gold as a catalyst began 25 years ago when chemists realized that nano-sized gold particles could catalyse the oxidation of carbon monoxide better than anything previously known. Since then, gold has been found to catalyse a host of other important reactions, such as the formation of azo compounds, which are used as leather and textile dyes, or intermediates for the production of polyurethane.

But for the most part, industry hasn’t yet turned to gold as a catalyst. The problem is that a lot of the precious metal is required – loadings of about 5% by mole for just a few hundred milligrams of substrate. For this reason, interest in gold as a catalyst has remained primarily academic.

But perhaps this is set to change, thanks to work by chemist Avelino Corma and colleagues at the Polytechnic University of Valencia. Corma’s group has discovered that gold can be a highly effective catalyst in tiny amounts if it is allowed to form ‘sub-nanosized’ clusters in solution.

The researchers focused on the ester-assisted hydration of alkynes. In this reaction water turns alkynes into ketones; it used to be used by industry to form acetaldehyde for the production of acetic acid and other chemicals from acetylene using a mercury catalyst.

The Valencia chemists formed the gold clusters by adding the reactant substrate to a solution of gold chloride (AuCl) or chloroauric acid (HAuCl4). Using ultraviolet spectroscopy and matrix-assisted laser–desorption–ionisation-time-of-flight (MALDI) mass spectroscopy, they found that the reaction began when clusters of between three and five gold atoms formed. Then the reaction proceeded swiftly, with a turnover frequency of 100,000 – that is, converting 100,000 substrate molecules per gold cluster per hour. Such catalytic activity is nearly five orders of magnitude higher than that previously reported, the researchers claim.

‘The higher the dilution, the better the formation of the clusters, [so] extremely low amounts of gold are sufficient to catalyse the reactions,’ says Corma. ‘Clusters are rearranging [with] time in the reaction mixture – but each reaction needs a type of cluster, i.e. a number of atoms of gold clustered, so control of the formation of [a] particular cluster would lead to an even more efficient process.’

The high catalytic turnover ‘is of significance for industrial applications’, says Stephen Hashmi, an organic chemist at Heidelberg University in Germany. ‘The fact that this is possible at room temperature is nice but, as most chemical engineers will confirm, for industrial reactors … room temperature reactivity is not crucial, [and] slightly higher temperatures are preferred.’