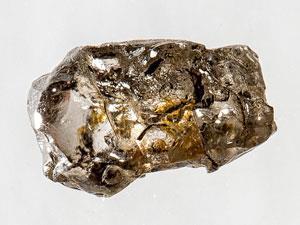 A tiny crystal found in a diamond has confirmed predictions about a giant store of water deep in the Earth’s mantle. The rock is the first direct evidence to back up theoretical models made over 20 years ago, and suggests the vast underground ‘reservoir’ – 500km below Earth’s surface – could hold more water than all the world’s oceans combined.

‘Diamonds give us a unique probe into Earth’s depths,’ says Graham Pearson from the University of Alberta in Canada, who led the study. He explains that diamonds form hundreds of kilometres below Earth’s surface, and can incorporate rock samples that would otherwise be impossible to collect.

While examining a diamond found on a riverbed in Juína, Brazil, Pearson and his colleagues discovered it contained a microscopic speck of ringwoodite – a mineral thought to be abundant in a region of the Earth’s mantle known as the transition zone, between 410 and 660km below the surface. Scientists can make ringwoodite in the lab by subjecting olivine – a magnesium iron silicate known to occur in the upper mantle – to very high temperatures and pressures, simulating conditions in the transition zone. But until now a sample had never been found.

Early work on ringwoodite in the 1980s showed that it can store water in the form of hydroxyl groups, and this led to theories that the transition zone could contain vast amounts of water, locked up in ringwoodite and other high pressure minerals. But these models have proved controversial and remote measurements of electrical conductivities in the transition zone have produced mixed results.

Pearson and his team calculated that the ringwoodite sample in the diamond contained up to 1.5% water by weight. ‘This indicates that there are very wet spots in the transition zone,’ says Pearson. Based on their sample, he adds, the transition zone could store up to 1.4×1012 billion tonnes of water – more than in all the world’s oceans put together.

‘This is a stunning discovery,’ says Joe Smyth from the University of Colorado, US, who did a lot of work on ringwoodite and put forward some of the earliest theories on the structure of the mantle. ‘Maybe the sample isn’t representative of the entire transition zone, but the identification is rock solid. It confirms that water may play a crucial role in controlling the processes of the Earth’s interior.’

Finding the ringwoodite was in fact a lucky accident, Pearson says.  ‘We were actually looking for a different high-pressure mineral using Raman spectroscopy,’ he explains. ‘My graduate student was searching through a bag of [transition zone] diamonds when he came across some unfamiliar spectra. He happened to be working with a colleague who was able to instantly identify these as ringwoodite, but he could have easily chucked it back on the pile and moved onto other things.’ 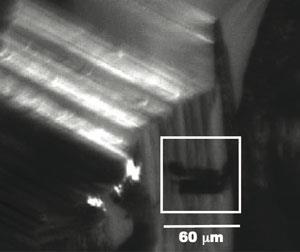 The team were able to confirm the sample’s identity using single crystal x-ray diffraction and to calculate its water content using infrared spectroscopy. The find is rare, says Pearson, because of ringwoodite’s instability. ‘Diamond is such a strong capsule that it’s able to retain a huge amount of internal strain,’ he says, ‘but a common technique is to polish a window in the diamond which causes it to heat up and the high pressure ringwoodite reverts to low pressure olivine. It was lucky we were using Raman, which is non-destructive.’

Dan Howell, who studies diamonds and their inclusions at Macquarie University in Australia, says the finding is important as ‘the first piece of physical evidence confirming the results of previous experimental and geophysical studies’. He adds that water in the mantle has a large influence on the melting and weakening of rocks, which in turn affects plate tectonics and volcanic activity closer to the surface. ‘Now that the presence of a water reservoir has been confirmed, it will help to direct future research in this field,’ he says.

Pearson is optimistic that further evidence will come to light. ‘Diamonds contain windows into the Earth’s interior,’ he says. ‘I’m sure there are lots more samples like this waiting to be discovered.’