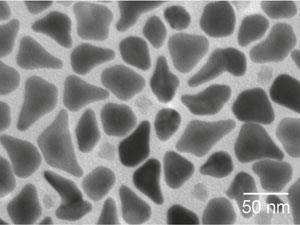 US scientists have synthesised pin-shaped nanoparticles with magnetic and optical properties. The team, led by Xiaohua Huang at the University of Memphis, says that the nanoparticles ‘could be used for magnetic resonance imaging (MRI), early detection and photothermal therapy of cancer and other diseases’.

Nanoparticles with both magnetic and optical properties are highly sought after in a number of fields, particularly medicine, where they could be efficient agents for imaging tumour cells using surface enhanced Raman scattering (SERS) and MRI.

Current optical–magnetic nanoparticles consist of an iron oxide core surrounded by a thick gold shell. Unfortunately, they are often over 100nm in size, too large for biological applications, which require particles as small as possible for effective transport around the body and into cells.

To reduce the size but maintain the properties, Huang’s team altered the geometry of the gold shell to form ‘nanopins’. These shapes were, on average, 50nm in length and 35nm at their widest part. The nanopins provided SERS activity 35 times better and photothermal effects 50 times greater than other iron oxide–gold nanoparticles.

Alex Wei, an expert in nanoparticle synthesis at the University of Purdue, US, says that ‘new types of nanoparticles with hybrid magnetic and plasmonic properties, such as these nanopins, are exciting for several reasons, including their potential for multimodal imaging (optical and MRI) and site-directed photothermal therapies’.